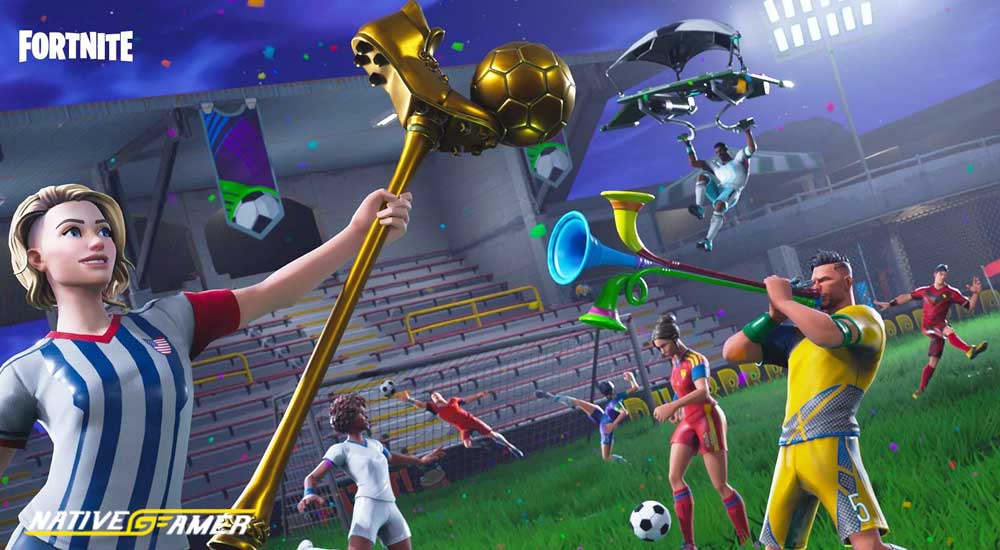 Fortnite’s soccer skins are customizable in many ways to suit your liking, homeland, or any other factor. The skins mentioned below were added to the game to celebrate and commemorate 2018’s Soccer World Cup. So, any player has easy access to 24 different style variants.

Fortnite’s soccer skins also let you alter the jersey numbers. So, you can label them according to your favorite soccer player’s jersey number. An important thing to remember here is that some of these skins are Battle pass exclusive.

Hence, you’ll have to buy the battle pass to proceed further and get a hold over a skin. Now, let’s take a look at some of the best Fortnite soccer skins that are worthy of your attention:

Any player with 1200 V bucks and access to the cash shop can buy the stalwart sweeper skin. Like most skins on this list, this rare skin also commemorates the 2018 soccer world cup. Right off the bat, this skin looks like the Finesse finisher female outfit. Due to unlimited customization options, players can switch between any jersey number (in the 0-99 category). Furthermore, the Stalwart sweeper soccer skin seems to have Asian origins due to its distinct features. Additionally, this skin belongs to the Goalbound set. You can switch up Stalwart sweeper’s design patterns according to your will.

Aerial threat got introduced to Fortnite players back in chapter 1 season 4. This particular soccer skin belongs to the Goalbound set. Furthermore, Aerial threat can be purchased for 1200 V bucks whenever it gets listed in the item shop. This is among some of the most acknowledged soccer skins in Battle Royale. This particular skin got released around the world cup. Thanks to the presence of various customization options players can alter jersey numbers. Those numbers have to be under the two-digit category. Additionally, the Aerial threat skin also provides various colors and design options based upon one’s chosen country.

Like most Soccer skins on this list, the clinical crosser’s also worth 1200 V bucks. This Fortnite skin made its first appearance back in Fortnite chapter 1 season 4. Furthermore, the original clinical crosser sports a pair of purple socks. You can also identify it through its prominent green band. This costume is customizable. Now, players can adjust jersey numbers between 0-99 or change design patterns. Also, it’s a part of the Goalbound set which is famous for its collection of soccer-inspired skin. The clinical crosser skin is one of the most popular female skins due to its interactive and dynamic nature.

This Fortnite outfit’s very rare. It made its entrance into the game around the world cup. The dynamic dribbler outfit in Fortnite is worth 1200 V bucks but you’ve got to wait till it’s listed. This soccer skin’s a part of the Goalbound set alongside various other soccer skins. Furthermore, the dynamic dribbler skin became a part of Fortnite back in Chapter 1 Season 4. Players can immerse themselves in the long list of customization options. It’s a great opportunity to make the best of all if you’re a soccer aficionado.

The finesse finisher isn’t your good old blonde character. She’s a sports enthusiast who’s bound to catch your eye. This particular soccer costume ranges for only 1200 V bucks. Furthermore, this is also rare skin. It got launched back in chapter 1 season 4 with most soccer skins. Finesse finisher’s whole attire consisting of a sporty jersey, shorts, and socks gives the impression that she’s here to win. Any player can customize their jersey number and suit it to their liking. It’s a great opportunity to commemorate the memory of your favorite soccer player. This skin’s popular for making appearances after every 90 days in Fortnite’s Item shop.

This skin is famous for its distinctly styled hair and beard. Midfield maestro is among some of the rarest skins in Fortnite. This particular soccer skin will ensure that you represent your homeland in style. There are at least 32 style variations for Midfield Maestro. So, every player has a chance to customize their outfit. That can be done through distinct patterns and different jersey numbers. Furthermore, this Fortnite skin’s also a part of the Goalbound set. For only 1200 V bucks any player can make this sporty skin their own in the item shop.

This rare soccer skin costs around 1200 V bucks and belongs to the Goalbound set. The features of this outfit suggest that it’s modeled after a character named Alina. Furthermore, the poised playmaker also has an undead counterpart named Decaying dribbler. The poised playmaker soccer skin can represent up to 60 other countries. These countries were part of the world cup. So, players have various customization abilities to mold their likings. The poised playmaker’s able to garner everyone’s attention. The credit goes to its very sporty appearance. Like most skins, this one can also be purchased from the item shop.

There’s no other Fortnite skin that’s as sought after as the Neymar Jr skin. This rare soccer skin inspired by the infamous Brazilian player looks pretty dynamic. Epic Games has also included 2 primal variants for this soccer skin. So, players can have something more interesting than the default one. The costume consists of him sporting a blue jersey with hues of red alongside a pair of blue shorts. Players can earn this world cup inspires skin after chapter 2 season 6 and it is a battle pass exclusive skin. So, players can only have the Neymar Jr skin after winning some special quests. Players will also get extra rewards for completing those challenges. These rewards include back bling and pickaxe.

While we’re talking about some rare Fortnite skins how can we skip over the super striker skin? This is a super rare battle royale skin that first made it into the game back in Chapter 1 season 4. Furthermore, you can get it from the item shop for 1200 V bucks. This soccer skin’s a prominent part of the Goalbound set and it was also released around the World cup. On average, the super striker skin makes the round of the item shop after every 80 days. This rare soccer skin also provides various customization options to players. These changes can be in the default outfit’s color, design or number.

Most of these soccer-inspired skins are very rare. Luckily enough, some of them do return from time to time. We’ve also mentioned the usual gap between these appearances. So, you’ll always have a hunch when you need to look through Fortnite’s item shop. Some of these Fortnite soccer skins are famous for their “try hard” reputation. So, if you’re someone who uses them you’re considered an amazing player. We hope that you’re excited about unlocking Neymar Jr skin’s other primal variants as well. Let us know which one’s your favorite soccer World Cup-inspired skin in Battle Royale!