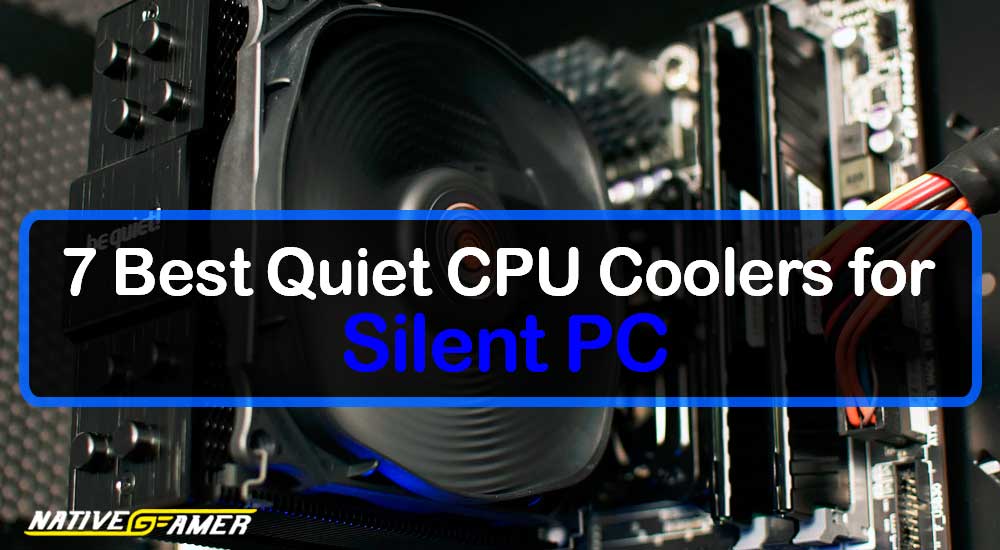 If you want a PC with a low noise component then a quiet CPU cooler must be on the top priority. The main purpose of the CPU cooler is to cool down the heatsink.

The CPU cooler comes up with a 4-pin PWM fan to cool down the heatsink. When the CPU cooler has a low load it is quite doing the operation but when the load increases the fan speed and it gets pretty loud and audible.

But the main advantage of a quiet CPU cooler is that it has got the right combination between heatsink and fan. It comes up with a bigger heatsink that comes with a silent fan and it does not make a lot of noise even when the load increases.

The fan also has anti-vibration rubber padding on the corner which absorbs the noise and makes the CPU cooler quiet and enhances the performance.

The silent CPU cooler is best for the people who are involved in sound recording, video recording, and video editing because it will not cause any interference with your work.

Here are the list of best quiet CPU coolers are mentioned below.

Noctua NH-D15 is one of the best CPU coolers and comes up with two fans. Although many new CPU coolers have been invented after Noctua Noctua gives the best performance as compared to others.

It prevents your system from making a lot of noise and keeps it silent. NH-D15 comes with two fans that cool the tower. The NH-D15 comes up with the Noctua package, the key feature of the Noctua is mentioned on the left side of the box and the summary of the cooler is mentioned on the right side of the box. Inside the box, you will find the fan and other components are labeled and placed separately in the box.

When you will take the CPU cooler out of the box one of the fans is already installed and the other one is boxed separately and it is optional. The size of the CPU cooler is quite large and you will need quite a large space. Installing Noctua NH-D15 is very easy; you just have to read the instructions and then install it. There is nothing bad about Noctua NH-D15 because it provides the best performance at a low price.

Corsair is a platinum model and comes with many unique features. Corsair gives support to all current AMD and Intel desktop CPU sockets. Corsair features a 40mm PWM fan. They help to cool down the heatsink even if the load increases.

Another notable feature of Corsair of CPU coolers is that it has a tool-free mounting bracket that can be adjusted to support any CPU type. It also eliminated the loud noise made by the PC.

The Corsair H115i RGB Platinum is an all one CPU cooler built for extreme cooling. Corsair CPU cooler comes in full packing on the left side of the box you will see the Corsair logo, 140mm fans, and five years of warranty. On the right side of the box, the whole summary of the product is mentioned.

Due to compatibility, the round thermal paste is not enough so the border application is used now. Corsair software controls the RGB lightening effect, fan speeds, pumps RPM, firmware updates, and peripheral and accessory customization.

Noctua NH-L12S is one of the best low profile CPU cooling. It features excellent compatibility, surprising efficiency, and remarkable flexibility. This model of Noctua gives even better performance than the previous one. It is a highly versatile CPU cooler with a fan attached to the top of the fins.

The total height of the cooler is 70mm which makes it perfect for the HTPC, and small form factor cases. The fan can be installed in a way that blows upward and blowing downwards to match the airflow direction inside the case.

Noctua comes up with a more advanced fan which gives better performance and flexibility. This CPU cooler comes in a box. On the front of the box, you will see the cooler printed on the top side.

It supports all the latest Intel and AMD CPU sockets. The fan of the cooler prevents the PC from heat up. The fan features a low noise hydraulic self-lubricating bearing a long life. Installation of the Thermaltake is quite simple and easy.

You have to mount the cooler to the Intel socket board. Once the adapter is placed in the desired Intel board the cooler mounts to the bracket. It is one of the most affordable CPU coolers at an affordable price.

It features a long-life hydraulic bearing that is reliable and performs a silent operation without making a lot of noise. The overall design of Thermaltake is quite impressive and simple. It also contains the resistor cable which reduces the operating speed of the cooler.

The two silent PWM fans feature advanced fluid dynamic bearing. The cooling CPU minimizes airflow restriction and allows heat to escape out so the PC does not get overheated. The top of the Top Rock features brushed aluminum top plates with caps that cover the heat pipes.

The aluminum fins are a bit thicker if you take a close look. Once you install the cooler the top of the Dark Rock 4 is highly visible. The full box of the cooler includes mounting hardware, screws, threaded standoffs, and washers all of these items are labeled. The CPU cooler supports all Intel and AMD sockets. The cooler can easily be installed and the black installation kit can be mounted from above.

It features a unique air blade that controls the air and creates more airflow. It has 4 heat pipes that dissipate heat faster from the CPU and remain the CPU to cool down.

It gives the best performance and better heat performance. It features built-in hydro bearing technology which ensures that the cooler runs smoothly and performs the smooth operation with the best durability and longer life.

The anti-vibration pads built on each corner help to maximize vibration during using it. It provides the best environment with less noise and efficient cooling.

The push-pull configuration keeps your CPU chill and provides the best performance. The fan of the cooler supports both PWM 4 pin and 5V 3 pin. It is one of the best coolers with a 61 lightening effect on both sides of the fan that can display lights.

CT406W features spectrum patterns and bright LED lights and provides many different features to cool your system. It supports 4 heat pipes that are capable of transferring the heat faster and minimize the air resistance and maximize heat dissipation area to allow the heat to dissipate from the system faster.

The fan built in the cooling system changes with temperature to make less noise and provide a higher cooling effect. The cooler is easy to install and provides impressive color visuals for your build.

It features a 4 pin fan that has built-in anti-vibration technology which absorbs the vibration as the fan starts working. The color of the CPU fan is white with different LED lights and displayed on both sides of the fan.

It produces less noise and enhances performance. It is compatible and can be placed in your PC cabinet; it does not require a lot of space. The fans on the cooler help in proper and continuous air circulation.

The first and foremost thing that you should always check in a cooler is that it is compatible with Intel and AMD socket. There are two types of coolers one is liquid CPU coolers and the other is air CPU coolers.

The difference between both of them is that the liquid CPU cooler offers better performance and they are lightweight. Whereas on the other hand air coolers are less expensive with no chance of leakage they offer less cooling performance and they take a lot of space on the motherboard.

Most of the coolers take a lot of space on the motherboard because of their design so before buying the cooler you must check whether the cooler fits in your cabinet or not.

Having multiple CPU cooling fans will help heat dissipation more rapidly. A quiet CPU cooler delivers good cooling performance along with quieter operation. If you have silent case fans install then they will not make any noise even at full load.