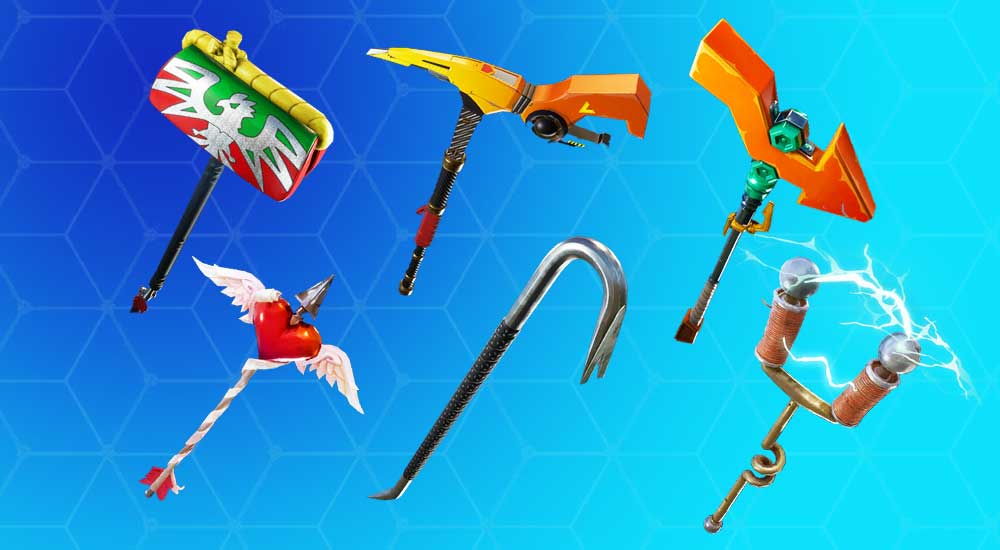 Pickaxes hold a highly essential stance in Fortnite’s world. Fortnite Battle Royale has a wide range of rare Fortnite pickaxes which usually aren’t on everyone’s radar while they are in the item shop. As stated earlier, pickaxes are very necessary. That’s because you will be using pickaxes to harvest material. This sort of material in turn usually gets traded for weapon-related upgrades. Needless to say, Fortnite pickaxes might not be that defensively charged. Yet, you can use them to take down your enemies near your drop zone.

This is an epic Fortnite harvesting tool that was added to the game in chapter one season 3. Furthermore, this pickaxe can be purchased from the item shop for up to 1200 V bucks. This pickaxe belongs to the Green Clover set in Fortnite. This particularly rare Fortnite pickaxe also features a pot of gold. There’s a vibrant rainbow near the pot of gold.

This particular pickaxe is a very unique-looking cosmetic skin in Fortnite. What’s even more unique about the ACDC pickaxe is that it doesn’t have any impact on the damage done to other players. This pickaxe also has zero impact on the speed of other harvesting resources. Furthermore, this pickaxe can also create an electric current. It converts default harvesting tools into a forking rod.

This rare Fortnite harvesting tool was added into the game in Fortnite chapter one season 5. The crowbar pickaxe belongs to the Getaway gang set. This particular pickaxe has zero impact on the efficiency of gathering resources. Another special fact about the crowbar pickaxe is that it looks very generic and goes well with multiple Fortnite outfits.

This pickaxe was part of the Royal heart set and when it is listed you can obtain it for 800 V bucks. Furthermore, this particular pickaxe belongs to the Holidays category. The Tat axe Fortnite pickaxe was added to the game in chapter one Season 2. The tax pickaxe appears to look like a cupid’s arrow with a heart-shaped structure at one end.

This is a China-exclusive Fortnite pickaxe that has an orange-colored arrow on its one end. As stated earlier this pickaxe is region exclusive which is why a lot of players aren’t aware of its presence. There’s nothing much special about this Cosmetic item except its regional exclusivity.

This pickaxe is perhaps one of the most exclusive ones on this list as it is only exclusive to China. Power grip has been specifically designed to convert any player’s pickaxe into a yellow and orange colored Power grip. Fortnite players belonging to the Chinese region can get the Power Grip pickaxe for free.

The piledriver pickaxe has been missing from Fortnite’s item store for about 150+ days but you can purchase it for 800 V bucks when it is listed. This rare pickaxe was launched in battle Royale back in chapter one season 5. Furthermore, this cosmetic item is a part of the Lucha set and Visibly enough it’s based on a wrestling theme.

First and foremost players have to achieve level 35 to purchase Raider’s revenge pickaxe for 1500 V bucks. This cosmetic item can only be purchased from the battle Royale seasonal shop. This is a rare pickaxe that appears like a usual default pickaxe with a rusty surface.

Players can achieve this pickaxe skin after unlocking the Ragnarok outfit. You’ll also have to complete the Ragnarok challenge. Furthermore, this cosmetic skin appears very medieval-looking and can emit a blue-tinted aura. This pickaxe is also a part of the Harbinger set in Fortnite. This rare fantasy pickaxe also appears very chiseled due to the glacial ice.

This pickaxe was added to the game in chapter two season 2. Players are obligated to become an FNCS champion to have access to this cosmetic item. The Axe of champions pickaxe also has a champion series logo on it. Players may find this rare pickaxe wrapped around a wreath.

This pickaxe belongs to the counterattack set and it can be purchased for 500 V bucks. This harvesting tool was launched in the game back in chapter one season 6. Furthermore, this pickaxe can optimize the design of a default pickaxe But doesn’t provide any gameplay benefits.

The rare Fortnite turbine harvesting tool is a part of the aviation age set. Using this pickaxe may result in a few animation changes and mild particle changes. This pickaxe is only available for the battle Royale version of the game and It can be purchased for 800 V bucks from the cash shop.

Whenever Death Valley pickaxe is listed it can be purchased for 1500 V bucks. This is a rare harvesting tool that appears like a regular pickaxe but with a bison’s skull attached to it. This epic pickaxe was launched back in season 1.

This harvesting item was last seen in the item shop more than 900 days ago. This is a rare harvesting tool And it is a part of the biker brigade set. Furthermore, a throttle Pickaxe can be purchased from the cash shop for 800 V bucks. This rare skin also doesn’t alter the efficiency of any gathering resources.

Fortnite’s pulse axe harvesting tool is a part of the storm fusion set. This is a rare pickaxe that is purely cosmetic. To obtain this pickaxe players have to purchase season 2’s premium battle pass and reach tier 7. Furthermore, this pickaxe doesn’t affect the efficiency of any harvesting resources. The Pulse Axe appears to be gray with orange stripes.

This ski boot harvesting tool can be purchased for 800 V bucks from the item shop. The ski boot pickaxe is also a part of the Winter ski set alongside some customizable items. Furthermore, this pickaxe was inspired by the South Korean Winter Olympics event that was held in 2018.

In battle pass season three this pickaxe was a reward for the players that reached tier 79. Trusty NO. 2 pickaxe was a part of the hired gun set alongside The high octane glider and the reapers outfit. This rare harvesting tool was inspired by the movie John Wick and It does not boost efficiency.

Back in season 2, this harvesting tool could be unlocked on tier 35. The name of this cosmetic item has been inspired by King Arthur’s infamous sword which is why this is a medieval-inspired harvesting tool. This skin will have zero impact on the damage inflicted on other players and harvesting resources. This phenomenon is pretty similar to other rare harvesting tools.

The candy axe rare pickaxe was introduced in chapter one Season 2. Players will require 1500 V bucks to purchase it from the cash shop when it is listed. Furthermore, this particularly rare harvesting tool Is very reactive as it can evolve based on changes in the game.

This real harvesting tool is worth 800 V bucks and It was added to the game in chapter one season one. The Reaper pickaxe Gives players the ability to turn any default harvesting tool into a reaper-like Scythe. Unlike most rare Fortnite pickaxes this one is not a part of any set.

This rare pickaxe was launched in Battle Royale back in chapter 1 season 4. You can purchase this rare pickaxe from the item shop for 800 V bucks. This pickaxe belongs to the solid steel set alongside 2 rare outfits and an Uncommon Fortnite glider’s skin. Furthermore, the persuader doesn’t have any impact on the efficiency of any default pickaxe when it gets equipped.

This harvesting tool comprises an anchor-like head and chains attached for security. This pickaxe also has a shaft which makes it easier to be gripped. You can also notice that its surface appears pretty rusty. This is why one can assume that it has been in the water for a while. Furthermore, the bottom feeder pickaxe was introduced in the game in chapter one Season 2 and you can purchase it for 1500 V bucks.

This particular rare pickaxe like other rarest Fortnite pickaxes hasn’t been seen in a while. The Moonbone pickaxe can be purchased from the cash shop for up to 800 V bucks. Furthermore, this harvesting tool was added to the game in chapter one season 8. The unique design of this pickaxe appears as if there’s a moon-shaped wooden structure attached to a wooden stick.

We hope that this article helped you locate all the rarest Fortnite pickaxes. Some of these pickaxes might have missed your attention while they were listed. now that you have acknowledged a wide range of these rare cosmetic items they’ll remain on your radar. Now you will constantly remain on the verge of accessing these rare harvesting tools. That’s because everyone wishes to further evolve their collection of the best Fortnite skins. That’s it from our picks if you have something to add do let us know in the comments!