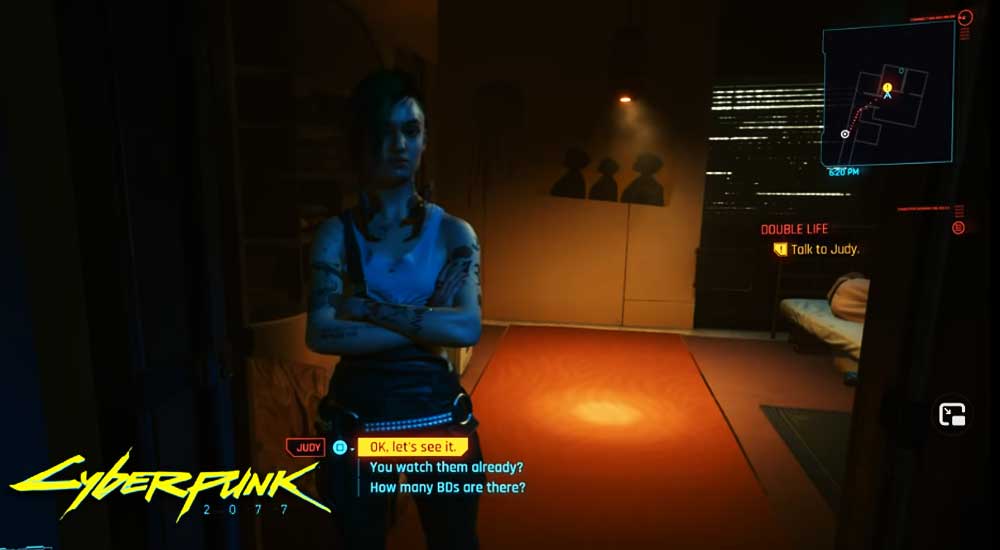 Cyberpunk 2977 is the game with story mode. The choices you make in-game will decide the future of your game. Not only that, but one mission is also the continuation of the other. So in this way, the choice you make in one quest will have its outcome on the other, as they are linked together. So make your choices carefully and with great precaution.

In “Double Life”, you have to look into the brain chip of Evelyn and will try to find out what has happened to her. From which circumstances she has to go through, and thus collect some clues from there. Stick to the article and you will find another lead of what happened to Evelyn.

The first objective of the quest “Double Life” is to talk to Judy. The Disasterpiece ended outside of the apartment of Judy, talking to Johnny about your day see here if you need Cyberpunk 2077 All Johnny Silverhand Items. So, the “Double Life” will start from the same place. Talk to Johnny and then meet Judy in her apartment. Reach her and talk to her about Evelyn

Go to Judy and talk to her about the health of Evelyn. Judy will tell you that she is resting and so sleeping. Judy will be angry with Evelyn that she hid something from her and not told her very thing. So she decided to take her mind chip and show the video to you on braindance. Watch the video and try to find the clues

While Judy is getting ready for the braindance, you will sit beside Evelyn for a minute or two. Ask her about her health but she will not reply. When you touch her she shivered at once, which shows that she is still afraid and not relaxed yet. Leave her there and let her rest. Then meet Judy to watch the braindance.

After approaching Judy, sit on the chair and she will hand over you the braindance and wear it. Judy will tell you that the person Evelyn met is very good on the internet as she altered the mind chip of Evelyn and that’s why the quality of the braindance will be very poor. But see it and try to find clues from it.

Watch braindance and try to find clues. You will see the video from the percept of Evelyn. She will be sitting behind some lady who will be telling her something. The face of the lady will not be cleared as she tempered the chip and hid her identity. So look for the clues to find out that here that braindance was recorded and who was with Evelyn in the video

Look for the clues in braindance

Finding clues in the braindance video is one of the difficult tasks to do. This is because you have to scan minor things in a large area. So look keenly. First scan the flyers placed near the feet of the Evelyn or on the backside of the women. Then scan the front wall where some pattern will be drawn. You will conclude the number of things from there. Then scan minor things from here and there and then exit the braindance. Then discuss a few things with Judy and she will show one more braindance to get more hints about what happened to Evelyn.

Then Judy will ask you to show you another video that might have some clues. In these videos, you don’t have to find any clues, just hear the caller who is standing on the other end of the stars. Her language will be changed. Ask Judy to install a language translator in your system. After she installed the audio translator, hear the conversation, and exit the braindance.

After exiting from the second braindance, ask Judy to go out so you can talk to Johnny alone. Talk to him about some voodoo boys. He will also tell you something. In short, you might have a small conversation with Johnny there. Then go out to meet Judy.

Go to Judy and talk. She will ask you about voodoo boys. You will say that you don’t know much about them but they are not trustworthy. They are extremely precautious with their dealings. So take every step with great care. Then leave Judy’s apartment and receive a good look from her.

Cyberpunk 2077 Shoot to Thrill Quest, How to Complete & Get Big Reward?