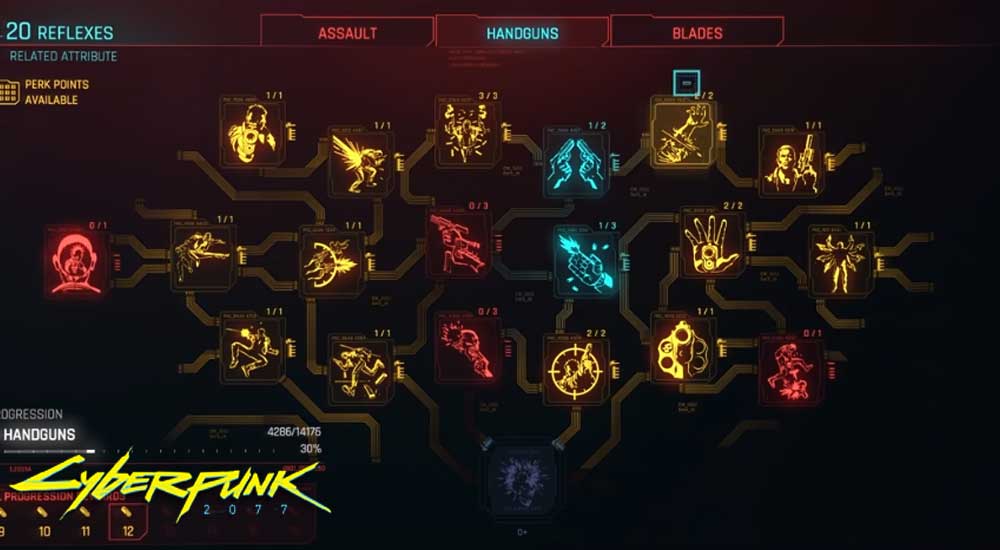 Cyberpunk 2077 Skill Tree, everything is high tech piece of machine. The game has visualized the year 2077. It gives a cascade about how the year 2077 will like. The game has modified cars, weapons, bikes, trucks, and every other thing. You can use fast traveling points to travel from one place to another in a blink of an eye.

This technology has not been limited to only machines and vehicles, the science has even modified human beings. In cyberpunk 2077, you can upgrade your character. It can be seen clearly from the theme of the game that V is not the only human that gets upgrades. Everybody in the game can modify the desired piece of his/her body.

V is the main character as well as the player’s character in the game. It has been one of the highest tech pieces of machinery. You can later anything in your character’s body. From the ocular system to CNS, you can upgrade or alter each and everything in your body.

So, therefore, the character has a skill tree that has to be designed according to the skill level of your character. By acquitting perfectly matched things, you can make your character an immortal killing machine.

Skill tree of the V consist of 5 major perks:

Every perk has its unique feature and consists of sub-branches. Perks are divided into skills and skills are further sub branched into the attribute. Attribute add the point in skills and collective skills increase the level of the perks.

And thus perks increase the body level of your character. Everything is in complete synchronization. So to enjoy the game completely, you must have to understand the skill tree that how it works. To understand this, you must first need to understand every attribute, including its sub-branches.

Body perks plays role in bodily strength and everything which is linked with the physical body of your player. It consists of three sub-branches:

Every sub-branch consists of 20 levels and different skills and perks. Increase your level according to each perk and skill. Gain point and level up your body perks.

Reflex perks involve the stamina and movement of the body of your character. So increasing reflex perks, your player will become fast, quick at reloading, and will increase his combat abilities. So the reflex perk is subdivided into three sub-branches:

So the reflex in the skill tree will increase the hand and other movements of your player.

Technical ability has a major role in opening or solving complex codes. It will help your player to hack into the complex systems and door. High technical ability also helps the player to pass through the locked door with ease.

It further consists of two sub-branches

Thus by increasing the technical ability perk, the player can pass through difficult places and can hack into complex systems with ease.

As the name indicates, this perk help V in hacking into enemies and their defense system. Suppose you get stuck in a quest and surrounded by enemies, intelligence perk will help you in getting out of this situation. Hack into the cyberware of your enemies to distract or kill them, and get free.

It divided into 2 sub-branches

Hence increasing your intelligence perk level will help you getting out of trouble when you feel surrounded by enemies.

The last perk is the cool perk. It plays role in maintaining stamina during stealth and assassination of the enemy. Moreover during combat or when you will any enemy, the cool perk will have a role in it. So increase your cool perk to turn V into a lethal killing machine.

It is sub branched into two perks

If you want to be the boss of the streets of the night city and want to take over every gangster, increase cool perk it will help you fight the difficult battles.

The key thing to remember in the skill tree

The skill tree has played one of the important roles in developing your character. If you understand eh skill tree properly, you can play this game with ease and can become a master in it. So to ease our reader, there has been a table of content at the start of the article. It will help them memorize the perks and sub-branches of the perks. So in this way player can increase his perk level according to his interest?