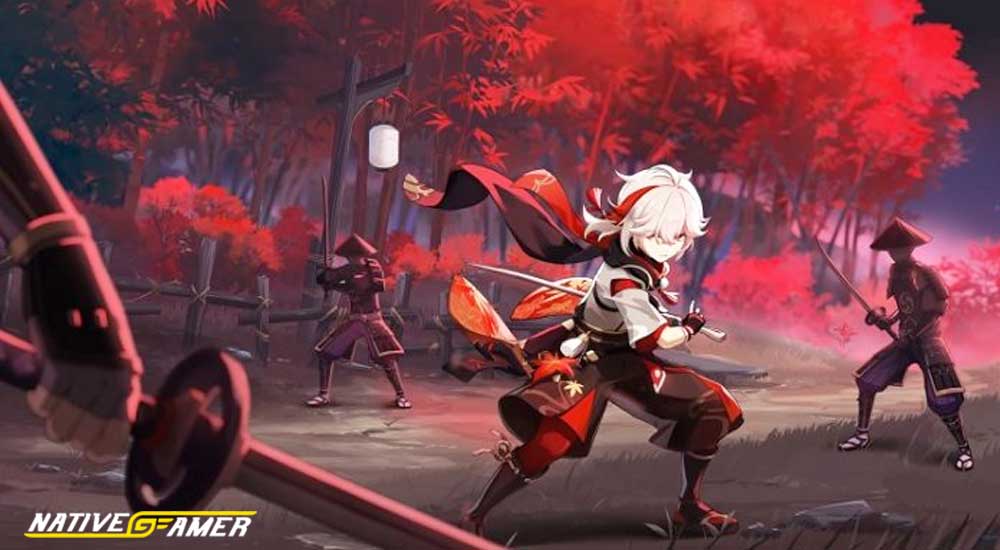 She has to join the crew because of the false allegation by Baal. Despite being samurai, she is very caring. Deep down in her heart, she carries dark experiences from the past. But she covers them and helps people. Moreover, she loves to explore.

Samurai mostly wear loose dresses. The same goes with this character as well. The character has blonde hair with one streak of dark maroon color. The overall look of the character is brownish maroon.

His whole costume is brown which fades into brown color as reaches the tip. Therefore he brown shirt with the belt on it. It keeps the clothes in one place.

The upper right side of the dress is white. This makes it unique. Moving down towards pants, these are red. The high brown sock perfectly blends with the color. The red-brown sandal with red socks matches the overall color scheme of the dress.

The best build for the character includes a sword and an artifact set. The sword includes a freedom swarm. The artifact set which set best with this sword is 4x Viridescent Venerer. This can increase the spreading damage of eh weapon. The damage can be increased up to 60%. Moreover, utilizing the power of the sword, the player can increase the elemental damage of the player to the great extent.

The sword can give elemental damage to the whole team. Thus facilitate all the crew members in the team.

Can land critical damage to the opponent. After doing so, 40% chance to end the CD of the character. This will happens after every 30sec.

The best artifact set suited for the character is 4x Viridescent Venerer. This artifact increases the speed damage by 60%. Moreover, it also decreases the enemies’ swirl attack by 40%. So the best weapon with this artifact makes the perfect build for Kazuha.