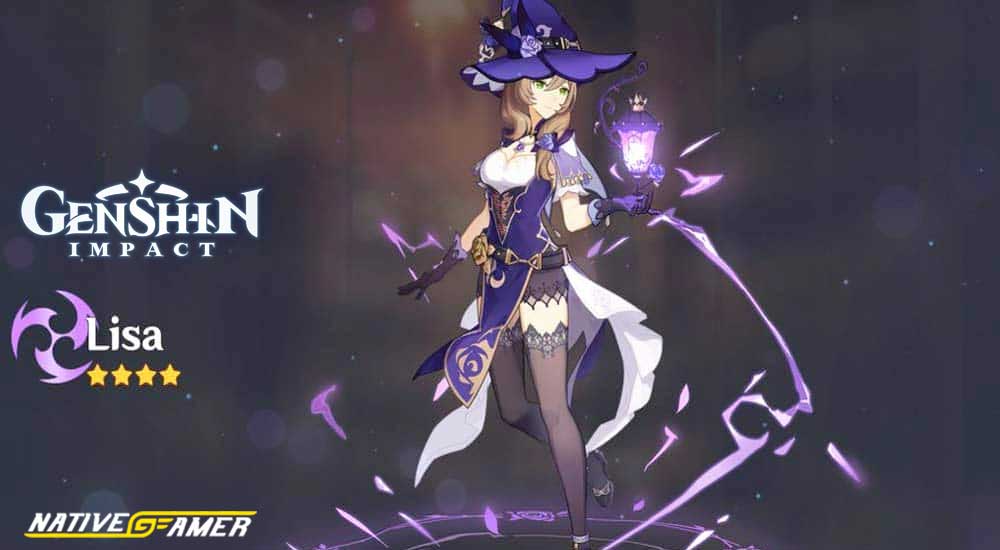 Lisa is the female character of the game. She is the electro character. She is the national of Mondstadt. Lisa is a witch by nature. But she has been the most distinguished graduate of her school.

She loves to wander about. She tries to gather the knowledge as much as possible. But soon she got afraid of the price. When she got angry or frustrated, the air around her becomes electrified.

Moreover, she is working as the librarian in the knights of Favonius. She doesn’t like books much but is devoted to her job. She even goes outside to collect the overdue books.

Like most witches, Lisa also wears a large hat. The hat is purple with a light purple lining. A purple rose adds to the beauty of the hat, representing the favorite flower of the character.

Keeping this interest, the whole character has a purplish theme. The character has blonde hair with purple eyes. A white shirt, covered by half sleeves purple jacket looks beautiful on the character.

The shirt is covered by a purple cloak with a golden belt. The dress reaching up to the thighs of the charter with golden wedges to the tips. The thigh long legging also has purple cutting on it.

This cutting looks symmetrical with that of the shirt to gives a satisfying pattern. Purple gloves and purple boots completing the purplish look of the witch.

The weapon has a base damage of 48. The weapon increases the elemental damage bonus by 12%. The normal attack can give the enemy extra damage for 15 sec. this has a 50% probability.

The weapon has a base damage of 42. The weapon can initiate the elemental reaction. This gives 8% elemental bonus damage to the player.

The best artifact set for the character is 4x thundering fury. Electro characters cause special benefit from it. This is so because it increases the charge and superconducts by 40% Genshin Impact Tier List. It also gives the electro bonus damage by 15%.