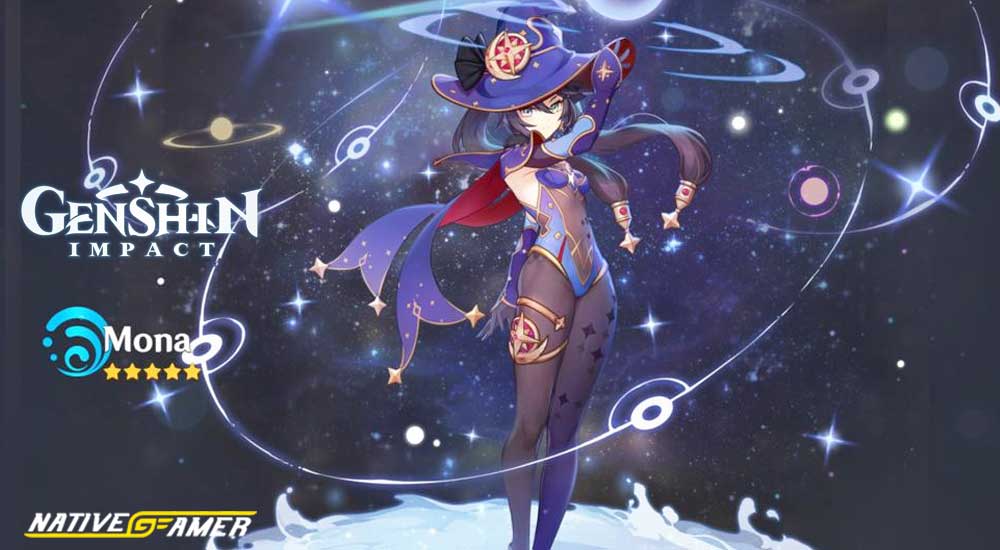 Mona is the female character of the game. She is the hydro character of Genshin impact. She is a resident of Mondstadt. She is an astrologist by profession.

She is very devoted and hard-working concerning her profession. She combines her profession and her mission to make astrology vast. She mixes hydro and astrology.

Therefore she becomes one of the best astronomers. She can tell whether a person is lying or not by just looking at his eyes at first glance. She read the secret diary of her master. So she ran away from him in danger of being get caught. So he takes shelter in Mondstadt and becomes a resident of it.

Mona wears the large purple witch hat with a golden and red emblem on it. This is the pretty color full character. She has purple, brown-red, and golden colors in her costume. Long purple hair with two long ponytails blends with the character.

The shirt of the character is like a bathing suit. It has purple, brown, golden, and red colors on it. There have been similar emblems like that of the hat on the right thigh of the character.

The leggings of the character are of two different colors. The right one is of pure brown. While the left one has blue color from the bottom and turns brown reaching the top. The Blue portion has small starts on it. The shoes on both feet are also different. Left when has a small red ruby on the front.

The best build for the character includes a catalyst and an artifact set. The catalyst is Lost Prayer to the Sacred Winds. The artifact set includes 4x Noblesse Oblige. This builds increases the elemental burst damage by 20%.

Moreover, the burst attack will also benefit the team members of the character. It increases the attack of all party members up to 20%. Therefore this build can be the hell bringer for the opponent.

The weapon has a base damage of 48. The weapon increases the elemental damage bonus by 12%. The normal attack can give the enemy extra damage for 15 sec. this has a 50% probability.

The weapon has a base damage of 39. This weapon is useful while switching the characters. The new character will have a 24% increased attacking power.

The best-suited artifact set for the character is 4x Noblesse Oblige. The set is best for use in the crew. The elemental burst increases the attack of all members by 20%. This turns the player’s crew into the suicide squad.