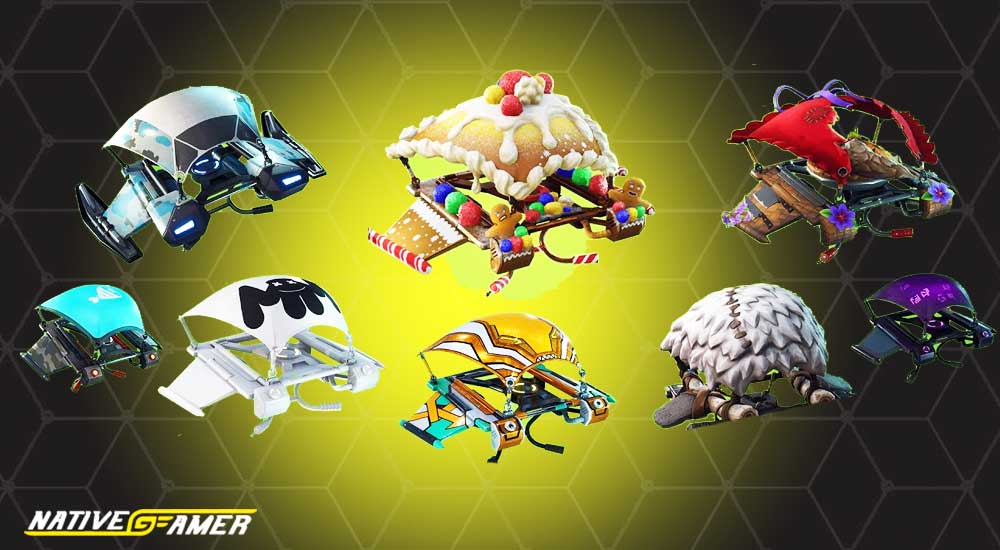 Most players are likely to find skins much more appealing than gliders in Fortnite. That is quite understandable because gliders aren’t as exciting as Fortnite skins can be in Battle Royale. Due to the uninteresting nature of these gliders, some gliders are extensively left unnoticeable. Henceforth after initial release, some best Fortnite gliders or skins become a little too rare and don’t appear in the item shop alongside others.

So if you probably weren’t around when these were launched, you are probably never going to have any access to these rare items. Yet it’s best to know what we are missing out on, so we can keep an eye on its later appearance in the item shop. To give you a brief account of some of the rarest items you’ve missed out on; here’s a list of some of the best rarest Fortnite gliders. Let’s take a look;

Once part 4 of Fort Nightmare challenges end players can obtain the dark engine glider. This is an epic glider that was added to the game in chapter one season 6. This glider is also a part of the western world set alongside Calamity and Deadfire outfits. This glider belongs to the holiday category and appears to look like a railway engine.

This is an epic glider that operates at extremely high horsepower. After the completion of five out of seven Tier, half-shell 100 challenges players can obtain the High octane glider. Furthermore, this glider is a part of the hired gun set alongside three other cosmetic items. The color of this glider is black with grey and red details on the surface.

This is a rare glider and you can buy it for 800 V bucks. Furthermore, the pivot glider Is a part of the counterattack set alongside 4 other cosmetic items. Players usually pair this glider with the reflex outfit skin. Lastly, this glider is dark blue with light blue wings.

Fortnite’s snowflake umbrella glider can be of great help when players are being chased by a mighty storm. This particular glider appears to be Frosty blue with white snowflake-like details.

This is another Fortnite glider with uncommon rarity. This particular glider belongs to the Fort Knight set. You can unlock this glider after reaching tier 35 of season 2’s battle pass. Sir Glider the brave, is one of the bravest is Fortnite kites. There are at least eleven other cosmetic items alongside this glider.

The get down slider was introduced in season 2 battle pass. This particular Fortnite glider can be excessed as a reward for reaching tier 14. The get down glider is also a part of the Fortnite fever set. This is a party scene-inspired glider which can surely get the moves going.

The royal X glider seems to have red, white, and orange stripes on its surface. This is a tier 42 combat glider. Furthermore, this letter is a part of the Storm Fusion set in Fortnite. It was introduced in season 2 In the game. Lastly, it’s one of the gliders with uncommon rarity.

After reaching level 25 in season one any player can have access to the Mako glider. This particular glider Has not been seen since season one. Once it gets listed again you can Get it from the seasonal shop for free. Players refer to this glider as a fairly normal glider.

As the name indicates this glider belongs to the aerial assault trooper. The aerial assault 1 glider is another uncommon glider with a camouflaged exterior. Yet, it’s pretty visible regardless of being camouflaged. This particular glider doesn’t belong to any set unlike most gliders on this list. Furthermore, Aerial assault fits perfectly well for battle-related strategies.

Fortnite’s cozy coaster can convert any glider into a holiday-inspired one. This particular glider doesn’t belong to any set in Fortnite. Furthermore, the cozy coaster glider can be purchased for 800 V bucks whenever it is in rotation. This is a holiday-inspired glider with a red and green exterior that might remind you of Christmas.

The rhinestone rider is another uncommon glider. This Fortnite glider can be bought for 500 V bucks from the cash shop. But, first, it needs to be in rotation which hasn’t occurred in a while. The rhinestone rider glider belongs to a sharp style set alongside 4 other cosmetic items.

The double helix is among the rarest items in the game. This particular glider isn’t currently available in the item shop. Interestingly enough this glider was an additional gift for players who took part in the Nintendo switch promotional campaign. This glider was a part of the double helix set alongside other cosmetic items.

Players can have access to the conquest glider after acing Season 5’s tier 39. This particular glider in Fortnite is a part of the Norse set alongside 5 other cosmetic items. Furthermore, the conquest glider looks like a flying Viking ship. The wooden horse symbol at the front of the ship appears very aesthetically pleasing.

This is another glider of uncommon rarity. The Raptor glider appears very similar to the aerial assault one glider. That’s because both of these gliders have camouflaged exteriors. Furthermore, this particular Fortnite glider belongs to the raptor set. Players appreciate the fact that it lands pretty professionally. Lastly, you can purchase it for 500 V bucks from the item shop when it’s in rotation.

This is an extremely rare glider that doesn’t belong to any set. When in rotation the fighter kite glider can be purchased from the item shop for 500 V bucks. This Fortnite glider appears half white and half vibrantly colorful. Furthermore, this particular glider Is very minimalistic in its style and general appearance.

The Royale dragon glider can be purchased from the item shop when it’s in rotation. Players can purchase this Fortnite glider for 2000 V bucks. Furthermore, this particular glider Isn’t a part of any set. Its players wish to keep hold of this particular glider they should keep their eyes on the featured list in Fortnite.

This is a very rare glider in Fortnite’s battle royale. The triumph glider is usually paired with the Venturion outfit. This particular glider is a part of the venture set and it is silver-colored. Furthermore, there’s also a V-shaped golden-colored decal on the exterior of the triumph glider.

This is another glider with an uncommon rarity. Fortnite’s Mainframe glider belongs to the Overclocked set. It can also be purchased for 500 V bucks whenever it gets listed in the item shop. The mainframe glider also appears as a grey and red colored umbrella. Lastly, this Fortnite glider also has minute yellow details on the sides.

As the name indicates this glider appears to be pretty similar to a wasp’s body. Fortnite’s WASP glider can be purchased from the cash shop for up to 500 V bucks when in rotation. This is an uncommonly rare glider that usually lies in the daily sections. Players are instructed to bargain for that 500 V bucks price value.

This is a very unique glider skin that can be purchased for 1200 v bucks. Fortnite’s Shadow Puppet Glider is a part of the Hacivat set alongside 4 other cosmetic items. This shadow puppet skin doesn’t impact the efficiency or acceleration of a default glider. So one can only rely on this for aesthetic purposes.

This glider was added to the game in chapter one season 6. The discovery glider Belongs to the Galaxy set in Fortnite. Furthermore, this glider was a part of the Samsung Galaxy promotions in partnership with Fortnite.

It’s unclear whether some of these gliders are temporarily or permanently banished from the item store or not. Therefore, one can always remain hopeful for their return. So, if you are someone who wishes to extend the list of items in their vault our picks are bound to be a very helpful source. We hope that this article succeeded in giving you a brief account of some of the rarest Fortnite gliders.