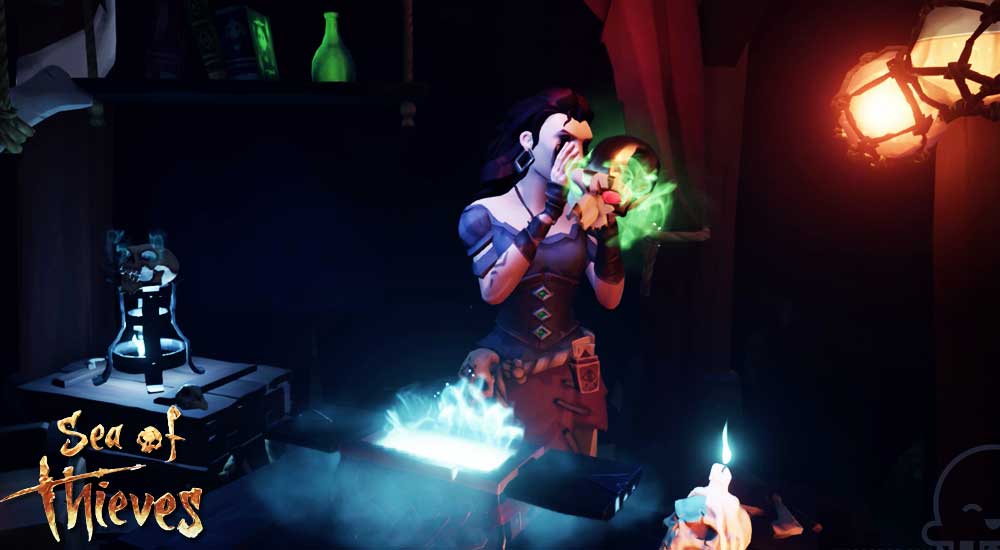 The sea of thieves game has been full of adventure. The player can either do missions or can explore different maps and islands to find hidden treasure. Talking about missions, there have been a total of nine major missions in the game, collectively named tall tales.

In that room, on the left side of the woman, the player will find a book named the cursed rogue. Vote for the book to start the mission. After voting, the woman named Madame Olivia will start talking. She will tell you everything regarding the mission, therefore, listen to her to get a brief outlook of the mission.

After that, open the book inventory and open the just collected book from there. As the player will open the book, the first will be named as the memories of Captain Marrow. The book will tell the player about the location of the island where he needs to go. The location and the islands will vary from player to player. So the player must keenly observe the pictures on the book and find his respective article.

The player will be provided with any of the following options. The Snake Island, the Shark Bait Cove, the Devil’s Ridge, Barnacle Cay, Wanderers Refuge, and the Castaway Isle are the options that will be provided to the player. Therefore the player needs to guess his island according to the hints given in the book. So go to that specific island to give Captain Avery and get the skeleton key.

3. Get skeleton key from Captain Avery

Go to the specific island to find Captain Avery. Now at that point, some players might wonder how they will guess that they are on the same island where they need to be? Don’t worry, the player will find all the answers in this article. When the player goes to the correct islands, some music sound will play and a background voice will start talking to the player. That voice will try to flee the player away.

Now after coming back to the ship, the player has to move to the next step in the book. Open the book and the next chapter will be the memories of the Blackheart Bill. In this chapter, the player will also get the different locations. This means all players might not get the same location to get to.

There will be different possible locations. Crook’s Hollow, Plunder Valley, Discovery Ridge, Lookout Point, Mutineer Rock, and the Thieves Haven will be options. The player will get any of the one locations where he needs to go. Hence the player needs to look for the clues in the riddles and the pictures in the book, and decide accordingly.

5. Find Captain Blake and get the skeleton chest

After finding your respective island, go there. Like the previous island, the sounds will be heard as the player will go to the right island. If the player will not hear any sound or music, it means he is on the wrong island.

Now the next step is to open the chest. Skeleton keys will be used to open the skeleton chest. After opening, there will be two different collectible things in the chest. Collect them and bring them back to Madame Olivia.

7. Come back to plunder outpost to the Madame Olivia

As the player hands over the things to Olivia, she will do the spell. A blue light will appear and then she crafts an enchanted compass. She will hand it over to you and tell you that the compass will lead you to the Briggsy. Briggsy is the main villain of this mission therefore it will not be easy to defeat her.

The enchanted compass will lead the player to the location of the Briggsy. Mostly it will be a rocky mountain-like structure. Briggsy will be found on the top of the mountain. Now the player has to fight her and get Briggsy’s skull. This enemy will not be the same as the previous pirates. So be careful while fighting her.

Now the Briggsy has three different attack modes. Two of them are not that much lethal, but the third is pretty dangerous. First, she will attack with swords, in second, she can teleport, and in third, she will create some sort of sonic field around her. The third attack is the most powerful. Because it will throw the player far away. Therefore, if the player will not have the cover of the ridge on his back, he will fall off the cliff and can die because of the fall damage.

To fight Briggsy, the player only understands her moves. As the enemy will start flying in the air, it means she is going to throw the player away. Therefore take cover at that point. Other attacks are easy to dodge. And hence after careful fighting, the player can defeat the Briggsy with ease.

In a nutshell, the player has to do three major things in the cursed rogue mission. First, he must find the skeleton key, which can get after dealing with Captain Avery. After that, the player needs to find the skeleton chest. The chest can be found at the location of Captain Blake. The third and final thing is to defeat captain Briggsy. To do this, the player must bring the belongings of the chest to the ilia, she will give the player an enchanted compass which will lead the player to be Briggsy. Defeat Briggsy, bring Briggsy’s head to Olivia to complete the mission.

In the second tall tale of the sea of thieves, there have been some things that the player must need to know to make easy progress in the game.

Sea of Thieves Shroudbreaker: How To Do The Shroud Breaker Mission?