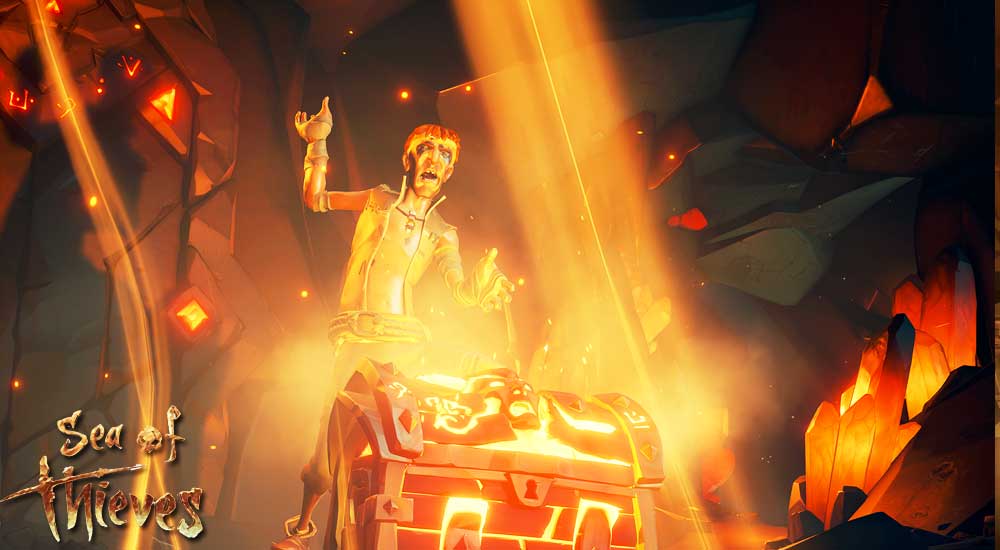 Heart of Fire has been one of the tall tales of the games. Like other tall tales, this tall tale has various ways to find and complete the mission. Hence in this article, the player will find all possible ways to do the mission with ease. So stick to the article to find the easiest way to do the Heart of Fire tall tale.

Start of the Heart of Fire

Head to the liar’s Backbone

After starting the tall tale, the player needs to head to the liar’s backbone island. After reaching there, head towards the top of the island. Then go right and the player will find a closed cave. Open the cave with the help of the liver on the left side. As the player pulls the lever, the cave will open.

After entering the cave, take left and then keep moving straight. In the end, the player will end up on the backside of the cave. There will be three stones that the player needs to turn in the correct pattern to unlock the secret vault.

The player needs to enter from left to right, king, flame heart and the third one will vary for different players. So try all the options and select which suits the respective player best. After that. Pull the lever to open the secret vault.

The vault will give the player two out of three things that the player needs to collect in the game. These will be mysterious keys and Stitcher’s Notes. Collect both of them and move further in the mission.

As the player jumps in the water, he will notice a giant cave-like structure with a pedestal in front of it. Place the key on the pedestal to open the door. As the player places the key, the flames will appear from the gate of the cave and it will lift to open the cave.

Enter into the cave

After entering the cave, the player now needs to pathway under the water. It will be a long stay underwater. So don’t forget to come to the surface and refill lungs with fresh air, whenever the player gets a chance to do so.

Hence, always keep looking for small air pockets. Come to the surface, and then dive in again. After following the long pathway, the player will reach the end of the cave. Here the player needs to climb over the rocks, below which, molten lava will be floating.

Therefore avoid falling in the lava and jump over the rocks to reach the three possible entries. Now the player can take any of the three pathways. This is so because each of them will have the same ending and will not affect the course of the game.

If the player selects the left-most pathway, he has chosen the easiest one. Hence it is the recommended pathway to do this mission.  This pathway mostly contains lava and flame traps. These traps cannot kill the player at once. So if the player unluckily got hit by the flame or lava, he will take a bit of the damage and then can continue his journey.

Now the player needs to keep looking for different levers across his way to the finals cave. Use the levers to summon the traps and to make new paths in the lava. Hence after passing through a few traps, the player will end up in a giant cave.

Get the Stitcher’s chest of rage

This cave will have Captain Flameheart’s ghost ship. At a distance rock, the player will see Stitcher doing some sort of ritual. Find the way to the Stitcher and as the payer goes near him, he will run away leaving the chest of rage behind. Pick the chest and come out of the cave.

The player needs to find the way out. During this, he can encounter different waves of skeletons. Use traps to fight the skeletons with ease. Keep following the pathway and the player will exit the cave.

Hand over the chest to pendragon

Use the chest or rage to kill the skeletons, by infuriating it by attacking the chest with the sword and then let it throw flames all around it, killing the skeletons. Then take the chest swim back to shore. At the shore, the player will find a pendragon. Go to him and hand him over the chest to complete the mission.

The middle pathway will be somewhat difficult as compared to the right one. But the basic things of all pathways are the same and that is to follow the trails and avoid getting hit by traps.

In this pathway, all traps are not only the lava or flame ones. Here, the player will also find some swinging traps. Follow the pattern and time the path of the swinging traps to avoid them. The player can use them to kill the skeletons as well.

The remaining things are the same, just keep following the trail until the player reaches the giant cave with the ghost ship and Stitcher. Get the chest from Stitcher and swim out of the cave in a similar pattern.

After opening the cave by burning the respective skull from the fore ball, the player needs to head to the cave and follow the trail and the path. After a while, the player will reach the spinning wheel trap.

To pass this trap, first, stop the first wheel by using a lever near them. Then go on right, and climb up the wooden plant. Then jump on the torch and then jump on the small wooden stand. After that, the layer needs to sword launch himself. He needs to time this launch perfectly to avoid hitting the trap.

After that, all the missions are the same, find the chest rage and exit the cave and hand it over the pendragon to complete the mission.

It does matter which path the player takes, it will always end up in a single direction. So, it is suggested to take the left path. This is so because it is the easiest path with very few and avoidable traps. If the player falls in the traps, he will get a little damage as compared to the traps of other pathways.

In a nutshell, to treat the quest, the player needs to head to the Morrow’s Peak outpost and then vote for the book in the Tavern. Then head to the liar’s backbone island to get the Stitcher’s notes and the mysterious key. Then head to the north of the Devil’s Cave Island and look for the pedestal to open the cave.

Swim inside the cave to find three gateways. Take any gateway you like. All of them will lead to the same ending. The only thing that differs will be the type of traps in every pathway. The left one is the easiest. Then reach the large cave and get the Stitcher’s chest of rage. Take it and swim out on the surface.

Find Pendragon near the shore, and hand him over the chest to complete the quest.

This mission is not very long, but the traps in the second step of the mission make it a bit confusing for some players. Here are some tips and tricks which if the player follows, will make the mission very easy.