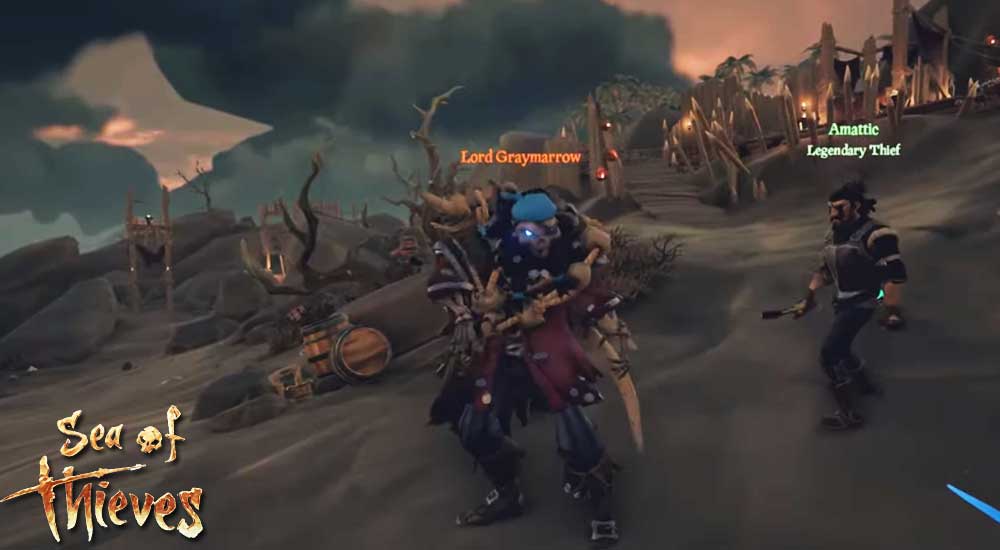 Revenge of Morningstar has been the second last tall tale of the sea of thieves. After this tall tale, there will be only one tall tale that the player needs to do to complete all tall tales of the games. In this tall tale, the player needs to get the Shroudbreaker stone after passing through a series of steps and after defeating different enemies.  In this article, the player will get to know the easiest way to the tall tale. So stick to the article and follow all tip and tricks mentioned in the article to do the mission with ease

Things to collect in revenge of the Morningstar

Start of the tall tale

To start the mission, the player needs to head to the Dagger Tooth Outpost. The coordinates of the island are M7. After that go to the shop where the player can get ship cosmetics. On the right side of the lady on the counter, there will be a book named Revenge of the Morningstar. Vote for that book to start the mission.

After voting, the lady named Sandra will start talking and tell briefly about the mission, like other tall tales. Listen to get a brief overview of the mission.

The first item that the player needs to collect is the Ship Logs. To get there, open the book and read the first chapter to know the location of the ship log. Mostly it will be in Boulder Cay. After going to the island, head to the south- southeast of the island. There the player will notice a shipwreck near the shore.

Follow the shipwreck under the sea. Now in the ship underwater, the player will find three Ship Logs. These Ship Logs can be seen from the top glowing golden. But as the player goes near them, their light will vanish.

So if the player needs to figure out the location of the logs, just towards the surface and then look down to see the golden glow. Head there and pick up the logs. The player needs to pick three Ship Logs from there.

After collecting all the logs, open them from the mission directory and read them. These logs will tell the location of the Morningstar uniform chest. This chest will be buried near the shore where the player finds the shipwreck. There will be a palm tree and a stone. The player needs to dig between these two to receive the chest.

Open the chest to get the Morningstar uniform. Wear it to make progress in the mission. Wearing this uniform will ease the mission as it unlocks numerous prompts in the game.

Now short of this mission, the player can skip the step of travelling to the Sanctuary Outpost and talk to Tracy and Tyler. These are optional steps. Talking to them will tell the player where he needs to go further. Well, in this guide you will get the answer to that question.

So just skip the step of going to the Sanctuary Outpost and talking to Tracy and Tyler. Hence after wearing the morning start uniform, just head to Cannon Cove to get the Graymarrow’s Order.

Defeating Captain Gripper will be easy and so the player can get the Graymarrow’s Order with ease.

Now, this is the most crucial part of this whole mission. Then after picking up the order, open the manual to see the pages. There will be symbols on the right page. These symbols will lead the player further in the game.

If the player will go back a few pages in the book, he will find some pages which will show what each symbol means. So it is better to take the picture of these symbols from the book, and then open Graymarrow’s Order to decode it. Compare the symbols and their meaning with the code to make the sentence.

Here is an example of how to decode Graymarrow’s Orders. Now the player doesn’t need to get the same code. There are huge possibilities for different codes. Hence the player first needs to compare the symbols and then make a sentence from them to solve the riddle.

After decoding it, there will be sentences like this:

It means that the player needs to go East from the cave. Then move out of the shades of the stone and come in the direct sunlight. Then face the beach and walk towards the north. Move seven steps and then dig to retrieve the item.

In this way after decoding the codes from the symbols and texts, solve the riddle in this way.

Get the skull of Captain Douglas

After decoding and then solving the riddle from the Graymarrow’s Order, dig at that place to retrieve the captain Douglas skull. It will also be one of the items that the player needs to collect to do the mission.

Now the player needs to head to the Sunken Grove and find Captain Shaw. Typically he will be on the top of the island, but still, his location may vary, so look for him on the island. After finding him, defeat him to get another set of Graymarrow’s Orders.

After getting the Graymarrow’s Order from Captain Shaw, these orders also need to be decoded like the previous one. First, decode the symbols to make the sentences and then solve the riddle or follow the directions given in the riddle.

Retrieve the Chalice of Resurrection

After following the riddle of the second Graymarrow’s Orders, dig to the place where the riddle will take the player. From there, the player will retrieve the Chalice of Resurrection. Pick it up and move further in the mission.

Now the next step in the mission to use the skull and Chalice that the player just gets. The player needs to place both of the items on the altar on the specific island and raise the final skeleton boss.

From the first order, on the left page, there will be an alphabet of the coordination. This alphabet will be in the inverted commas so the player will easily identify it as the coordinate marks.

Here are some island along with their respective coordinates which the player might get:

So just find the coordinate and head towards the respective island to find the pedestal. After that, place the skull and Chalice on the pedestal to raise the Graymarrow.

Now when the Graymarrow rises again, the player needs to defeat him. Defeating him will not be an easy task. He will give a lot of damage to the player. So it is necessary to judge the movements of the Graymarrow and theme attack accordingly.

If the player watches eh Graymarrow carefully, he will learn that he has three basic attacks, out of which one of the most powerful. In this attack, the Graymarrow will create a blast that will throw the player far away and also damage him a lot.

After defeating the Graymarrow, he will drop the Shroudbreaker stone. Now the player needs to take this stone back to the dagger tooth outpost and give it back to Sandra. Hence this will complete the mission and the player will have only one last mission to complete his tall tale.

Then receive the chalice. Then find the island from the coordinates mentioned in both orders. Go to the respective island and place both skull and chalice on the altar to awake the Graymarrow. Defeat him to get the shroud breaker. Take this Shroud Breaker back to Sandra to end the mission.

In this mission, there have been some key things that the player should keep in mind to make speedy progress in the game: