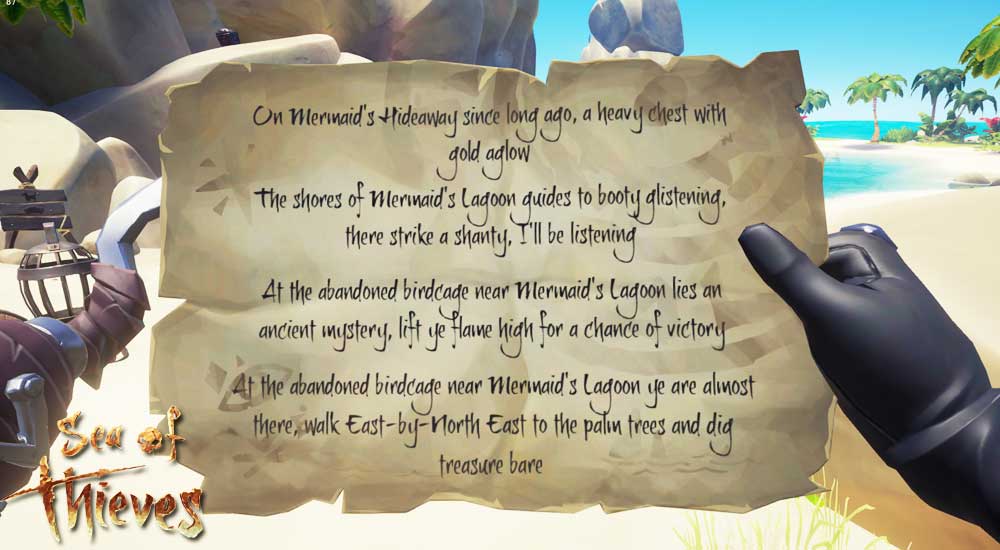 Sea of Thieves has been a game full of riddles and mysteries. In the whole game, the player has to solve the various types of different riddles through different means. Sometimes he needs to follow the mission manual and sometimes he needs to follow the hints and ghost tracks of the skeletons or the ships.  It all depends on the type of mission or the quest the player is doing.

Riddles in the Tall Tales of the sea of thieves

Vault in the different missions

In various missions, there has been a vault that players need to enter and solve the riddle. Every vault may have a different riddle to solve.  But all vaults have a common mechanism and common traps. Once the player enters the vault, he needs to light up all four corners of the table. Once the player has to light up all the corners, the vault will start flooding with the water.

Once the player has completed all the riddles, the water will automatically stop flooding the vault. And if the player got unlucky and drowned in the water, he needs to start the riddle again. So in this vault, the only key is the time and swiftness of the player to solve the riddle before getting drowned.

Find the island which the player needs to visit

Finding the islands through constellations

Finding the islands from the chapter of the books

This example can be found in the third and fifth tall of the game. The example of the fifth tall is given below. Here we mention only a few chapters and their corresponding island, to make things clear for the readers.

If the payer gets a chapter named salty sands, he needs to go to the salty sands islands. The coordinates of the island are G3. After going there, go to the north most of the map. After that, find the location where George is standing in the book. Match the location and pinpoint the location of George. After doing so, dig there to retrieve the respective box.

If the player gets the chapter named Our First Kiss, he needs to go to the Lagoon of Whispers. The location of the island is D12 according to the coordinates from the map. Then find the location from the picture. After that, go to that very specific point where George and Rose are standing, and dig there to get the respective item.

We survived our first ambush

The player can also get a chapter named We Survived our First Ambush. If this is the case, he needs to go to Cannon Cove. The location of this island is G10 according to the coordinates from the map. After going to the island, head towards the east beach. Then find the location with help of a picture in the book. Where George and Rose were standing, dig there to get the respective item.

Finding the island from the respective totems

Now in some cases, the player will find a specific totem. This totem will lead the player to the specific island. Now during the mission, the player can get to know about the location of the island by reading the book. But in reality, all totems indicate the same island, irrespective of the mission.

So, here is the list of all totems and their receptive islands from the game. If the player finds any of them, he needs to head towards the receptive island to make progress in the mission.

Look through different objects to find the way in the mission

In some cases, he needs to look through the wooden plank and find the location which perfectly fits the carvings of the planks. Hence there have been several things that the player can use to solve the riddles in the game and to make progress in the game.

Pathways leading to the right direction

So to solve the riddles with ease, just focus on mentioned keywords and always try to relate the original things from the book. In this way, the player can easily solve the riddle and can make his way to complete the mission.