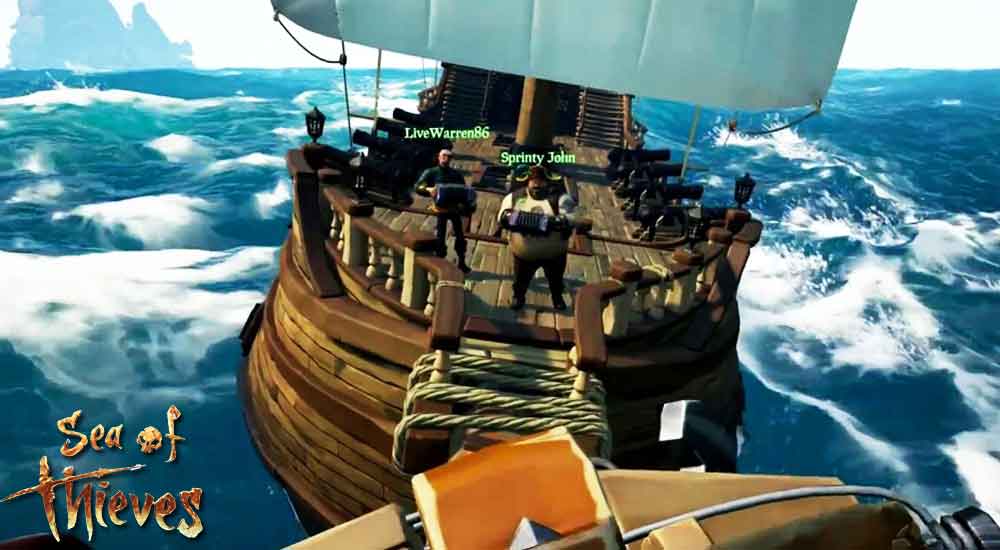 In the sea of thieves, the main storyline is called a Tall Tale. There have been a total of nine Tall Tale missions. All of these missions are interrelating and lead to the last mission named shores of gold. That’s why in the update, the Tall Tale series has also been named as shores of gold.

Every mission has its unique characters and pathway and the player needs to collect specific items or things in each mission to complete this. In this article, the player will find the objects or items needed to find, a brief outlook, and some tips regarding each of the Tall Tale missions. So stick to the article to unravel the mysteries regarding the Tall Tale of the sea of thieves.

After that, find the golden chest near the southwest side of the snake aisle. Then retrieve the belongings of the chest. After that, head back to Crook’s Hollow, and find the vault behind the waterfall. Solve the riddle around the table to get the location of the medallion from the table. Head to the location to retrieve the three medallions. Place them on the table in the vault to get a Shroudbreaker. Take Shroudbreaker back to the mysterious stranger to complete the mission.

In this mission, the player needs to collect the shipping manually, then a golden chest to retrieve more logs. Then find three medallions by solving the riddle inside the vault and then get the Shroudbreaker from the vault.

There have been some important things that the layer must keep in mind to the mission with ease:

The second mission in the Tall Tale is The Sea of Thieves Cursed Rogue. In this mission, the player has to do three major things in the Cursed Rogue mission. First, he must find the skeleton key, which can get after dealing with Captain Avery. After that, the player needs to find the skeleton chest. The chest can be found at the location of Captain Blake. The third and final thing is to defeat captain Briggsy. To do this, the player must bring the belongings of the chest to the ilia, she will give the player an enchanted compass which will lead the player to be Briggsy. Defeat Briggsy, bring Briggsy’s head to Olivia to complete the mission.

In the second Tall Tale of the sea of thieves, there have been some things that the player must need to know to make easy progress in the game.

In the third mission of the Sea Of Thieves The Legendary Storyteller Tall Tale, the player needs to find three items first, two keys, and one chest. These items will be found from three of the 11 islands. The player needs to go to the respective island according to the chapter from the book.

Open a chest by using the same two keys. The chest will contain a wooden plank with some hints. This will lead the player to the fourth and final item and that will be the ancient crown. Dig the crown out and bring it back to Tasha to complete the mission.

In this Tall Tale, the player needs to remember some of the key things which will ease various difficulties for their player.

Stars of a Thief Tall Tale

In the second chapter in the second half, the player will get two chapters out of nine randomly, from where he can find Star Jewel. Thus after collecting both start jewels, he needs to place them in the statue near Briggsy’s ship. The statue will give the totem.

The player should keep the following things in mind to make progress in the game:

The Sea of Thieves Wild Rose has been the fifth Tall Tale of the game. It is about the love story of George and Rose. In this mission, the player needs to go to the sanctuary outpost to start the mission. After that, he needs to look for the chest of memories from one of the three mentioned locations. After that, he needs to look for the music and spice box in two of the mentioned islands, in the article. Then take these boxes back to Madame Olive.

She will give an enchanted compass to the player, which will lead him to the location of Georgia and Rose. Get the pendants from George and Rose and take them back to Madame Olive to complete the mission.

Take these items back to Madame Olivia to get another item and that will be an enchanted compass. Then after finding skeletons of George and Rose, get the final item, i.e. their pendants, and bring them to Madame Olivia.

The Art of the Trickster Tall Tale

In the sixth Sea of Thieves The Art of the Trickster Tall Tale, firstly, the player needs to go to Salty in the Plunder Valley to start the mission. Then he needs to go to the cave to the western side of the beach to get the Spyglass. After that, the player needs to find the Trapmaster’s notes and Trap Masters Gunpowder key. Use the spyglass and riddles from the books, or simply follow the tricks from this article to pinpoint the location of both objects.

After getting the key, head to the Sailor’s Bounty to do the next step. Pass the caves with precaution and then place the key on the pedestal in the cave. Kill the captain Lair which will spawn thereafter placing the key, and get the totem.

Then head to the island according to the type of totem and then get the Shroudbreaker stone after defeating the waves of the skeleton there. Get the stone back to Salty to complete the mission.

Items need to collect in the mission

Some key thing to remember

There have been a lot of things to remember regarding this mission, as it has a lot of traps and hurdles and various other difficulties where the player can get stuck.

The fate of the Morningstar Tall Tale

In this Fate of the Morningstar Tall Tale, the player needs to free three souls in this mission. To start the mission, head to the Ferryman in the ferry of damnation. After that, collect the lantern from the mentioned two of the possible locations. Then heads towards the next two of the possible locations to find chests and the keys. Follow the ghost skeleton to find all chests and the keys.

After collecting all six items, open the chests and free the souls. Return to the Ferryman to complete the mission.

Items to collect in Fate of the Morningstar

This mission is relatively self-explanatory, hence there has been not a lot to remember. But still, there are some things that the player needs to remember while doing this mission.

Revenge of the Morningstar Tall Tale

Then receive the chalice. Then find the island from the coordinates mentioned in both orders. Go to the respective island and place both skull and chalice on the altar to awake the Graymarrow. Defeat him to get the shroud breaker. Take this Shroud Breaker back to Sandra to end the mission.

Item to collect in revenge of the Morningstar

In this mission, there have been some key things that the player should keep in mind to make speedy progress in the game:

The Shores of Gold Tall Tale

In the last and final mission of the Sea of thieves The Shores of Gold Telltale series, the player needs to head to Morrow’s Peak Outpost to start the Tall Tale. Then he needs to go to The Shores of Gold Island to find four medallions from four different vaults. These vaults will be scattered all across the map.

Get all the maps and place them in the Stoney statue to get the Gold Hoarder Coin. Place the coin on the stand in the basement of the headless statue. Follow the path which opens after placing the coin. Avoid traps and reach the Gold Hoarder. Fight the boss to get his skull. Use the skull as you want. And thus the player can complete the mission.

In this quest, the player needs to find 6 items in total. 4 will be a medallion, which will lead the player to the fifth item, which will be the coin. And that coin will lead to the sixth and final item, which can be obtained after killing the Gold Hoarder boss. The last item will be a Gold Hoarder skull. Bring the skull back to any order of souls and sell it for a high price.

In this lengthy and laborious Tall Tale, the player needs to follow some key steps to avoid any extra trouble and to save time. These things are: