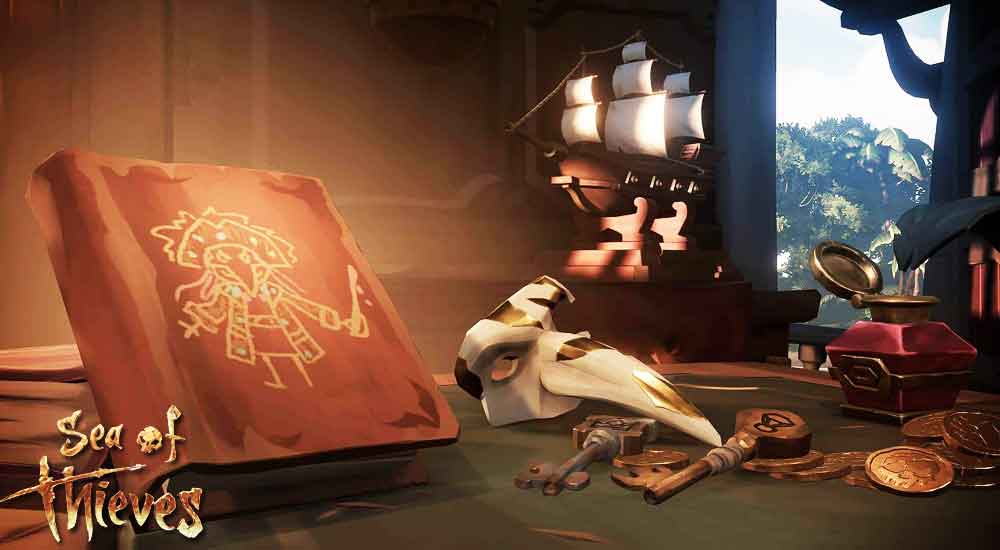 The missions in the sea of thieves are called tall tales. The Legendary Storyteller is the third mission in the tall tale. Like other sea of thieves tall tales, in this, the player has to explore different islands. The player needs to figure out from the riddles, clues, and hints which island he needs to go.

In the Legendary Storyteller, the player has to visit three islands by solving different hints and riddles. In this article, the player will find the solution to all the possible riddles provided to the player. So stick to the article to find the easiest way to do the mission.

Items to find in the mission

Start of the mission

To start the mission, the player needs to come to the outpost of the ancient spire. It will be at the top of the hill. Enter the room and on the right side of the bartender, there will be a book named the Legendary Storyteller. Activate the book to start the quest.

Once the player activates the book, the bartender’s name Tasha will start talking. She will tell the player about her old relationship with Briggsy and how they both love to enjoy and play. After listening to her, the player needs to get the book and come back to the ship to start the mission.

Start looking for the islands

After getting to the ship, open the book. Now in this mission, the player has to visit three different islands to get three different things. But all of these islands vary from player to player and their sequence also varies. So in this guide, the player will get to know about all the possible islands which they might encounter to collect the item.

The player needs to collect two keys and on the chest from three different islands. The hints and clues regarding the island will be found in the different chapters of the book. The player needs to solve the riddle and figure out the island where he needs to go to collect the item. The possible chapters along with islands that the might player get are mentioned in this article, along with the location of the respective item which the player will find in that respective island.

Dig in front of the small boat to get the first item. It will be two of the one key or the chest. All the items are randomly spawned in all the islands so the player will get any of the three in all the islands. The player needs to collect all three items to make progress in the chest.

The next possible chapter of the book can be the fish friend. In this chapter, the player will find the hint which will lead him to the island named Mermaid’s Hideaway. After going to the island, the player needs to find the giant pillar which will be separate from the whole island area. To reach there, use the cannon of the ship. Fire yourself to that peak.

The player might miss the target initially but after trying once or twice, he will reach there successfully. After reaching the top, dig near the tree to find another item. As mentioned, it could be any of the two keys or the chest. Collect the item and find the other missing items.

The third possibility is that the player might find the chapter named Monster Hunting. Solving the bridle of this chapter will lead the player to the Crooked Masts. The Crooked Masts have a characteristic three peaks of the mountain which can be identifiable with ease. Therefore the player will easily figure out the island.

After going to the Crooked Masts, the player needs to go to the southwest corner of the island. There he will notice a sunken ship on the right side of the large mountain. Go underwater to gain access to that sunken ship. The player will the other piece right near the ship. Collect it, and continue the hunt for the remaining pieces.

The next possible chapter in the book can be the Baddies Attack. If the player will find this chapter in his book, it means he needs to go to the Old Salt Atoll to find one of the three pieces. If the player carefully looks at the drawing on the book, he will see the ship wreckage on the island. And there is only one island which has a wrecked ship on the island and that is an old salt atoll.

Go to the island and then move towards the front side of the wrecked ship. Start digging there and there the player will find another missing item. Collect it, and continue searching the remaining items.

Dig in front of the rock to get one of the three items of the mission.

The next possibility is that the player will find the chapter named the Treasure Adventure. In that case, the player needs to look for the item on the unknown island. From the drawing in the book, it will be evident that the island is split in half and the ship is sunk deep in the half islands. The location of that island will be K9, according to the coordinates on the map.

After going to that island, the player needs to dive in the water in between the two halves of the island. After that, the player will need to dive deep. There he will find a ship but still go farther deep in the sea. After going deep, the player will see a golden glimpse from a distance. Go there and collect the item.

Another possibility is that the chapter will be named Monster Island. In that case, the player will need to go to Thieves Haven. After going to the mentioned island, the player needs to find the ship wreckage in the centre of the island in a little pool.

To get the missing item from the Thieves Haven, the player needs to go to the centre of the island and then climb to the top. Climb up both ladders to reach the waterfall. Behind this waterfall, the player will find the three stones embedded on the sand.

These stones will not be ordinary stones and will have the drawing of the faces on them. So it can be said that the player needs to find the three stones head there. After finding them, dig in front of them to get one of the three items.

Scary Friends have been another chapter in the book with different hints, riddles, and clues. If this chapter appears in the book, it means that the player needs to go to the Krakens Fall. After going to Kraken’s Fall, go to the north side of the island and then to the north beach.

Windy Wings have been another mysterious chapter in the book. If the player got this chapter in his book, he needs to go to the Plunder Valley. After that go to the top of the valley. There the player will notice a wooden path leading to the statue. Near the wooden path, there will be a skeleton embedded in the ground. The layer needs to dig in front of that skeleton to get his missing item.

After that, go to the south of the water well. Climb up the hill and follow the Stoney path. Soon the player will see palm trees with the lantern on them. The payer will be lightening up the small area. It is the same area that players need to dig. After digging, he will find the missing item.

The Rescue Mission is another possibility that the player might get during this mission. If this happens, he needs to head towards the Crooks Hollow. After reaching the island, go to the south side of the island. There the player will see a cliff.

Climb the cliff and go towards the west side of the bridges. Dig there and the player will find his missing item of the mission.

After opening the chest, the player will find a wooden plank inside it. This wooden plank will have some sort of boundary or marking on it. Now the player has to look through these markings and point the plank towards the direction where he can fit any object in that marking.

The player has to use a plank-like board to stop the sun rays. When he does so, he will see that some object or pattern will match the pattern on the planks. In addition to that pattern or engraving, the player will see a small circular cutting on the lower die of the board.

This circular cutting will show the location of the 4th and final item of the mission. At that location, the player needs to dig. After digging, he will receive the fourth item and that will be the ancient crown. Now the player needs to go back to Tasha and give her that crown to complete the quest.

Go back to Tasha on the ancient spire outpost

After collecting the ancient crown, go back to the ancient spire outpost from where the player has started that quest. After that, go back to Tasha and hand her over the crown. She will be very pleased after getting that crown. This will complete the third tall tale named the Legendary Storyteller.

In the nutshell, the player needs to find three items first, two keys and one chest. Open a chest by using the same two keys. Just will contain a wooden plank with some hints. This will lead the player to the fourth and final item and that will be the ancient crown. Dig the crown out and bring it back to Tasha to complete the emission.

In this tall tale, the player needs to remember some of the key things which will ease various difficulties for their player.