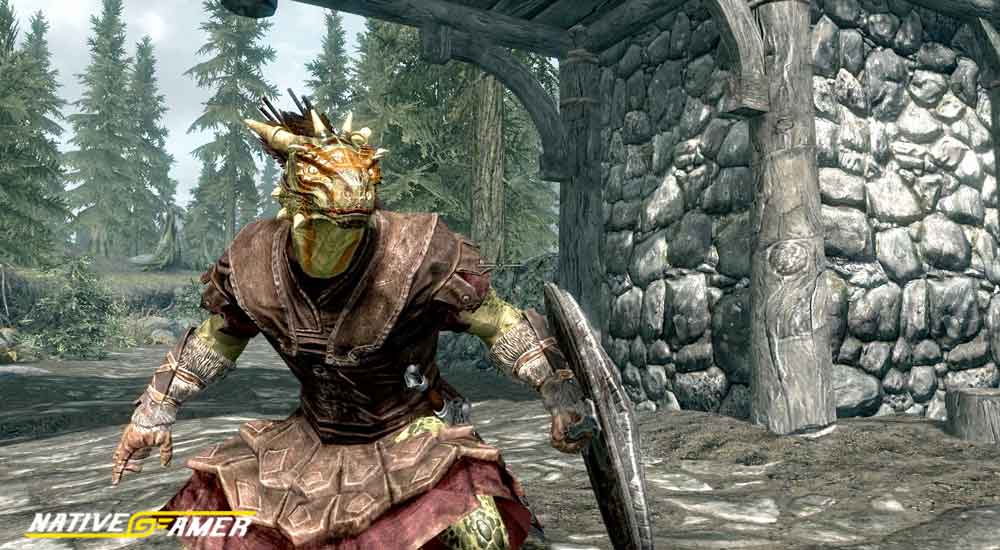 Skyrim Argonian Mods is another one of the best mods featuring a lot of mods that will give you a different experience. Some of these mods do not affect your character directly but they all serve to improve your experience as an Argonian.

But from each mod, you will get fantastic experience and fantastic to play with them. This mod also gives you a lesser power heat version, and the abilities of claws, water affinity, and poison resistance.

I have made a list of the best Argonian mods that you can install and improve your experience as an Argonian player and turn the game into a much more pleasing experience.

If you are willing to go around killing people or stealing stuff then this mod is best suited for you. This armor is meant to be worn by Argonian.

In this mod, you will have access to different eye styles for your Argonian character. With you will apply these eyes to the character your character will look creepy and unpleasant.

This mod adds female fins and male Argonian. Argonian had large fins on their heads. In this mode, you can even improve the texture of fins and even try new hairstyles on your character.

Argonian don’t have hairs, especially lizards and water creatures. These dread Tentacles grew out of your character’s head. This mod is one of the best mods in which you can make your Argonian look like Bob Marley.

This mod has completely changed the way horns look by adding customized texture which is completely different from the one that comes with the vanilla game. Horns add more beauty to your Argonian character.

This mod made Argonian look better by improving the texture of skin tone and by adding some new and unique texture to the game. This is a small change but noticeable if you are playing an Argonian character.

In the base game Argonian’s tail was so unnatural and looks so bad when you enter sneak mode. But the developers fixed the Argonian tail and now it looks much better and natural than the base game.

Argonian Mercenary Armor might be the only armor that suits Argonian fighters and it makes them look as badass as any warrior in the game. If you are playing as Argonian then this mod is best suited for you.

If you have installed this mod you will probably feel the difference. In Raptor Feet mod which makes the feet of your Argonian character look like they were the feet of an ancient velociraptor.

This is one of the best mods which allows you to adopt an Argonian kid who is well detailed and perfect to fit most types of players. The kid is quite cool and fits Argonian play through quite perfectly.

This mod adds Darkwater den to the game which is a marsh-looking house for Argonian to make them feel like they belong there. The creator has put a lot of effort into making it look real and natural.

As the name suggests this mod has increased the size of the Argonian tail in a natural way. Now the Argonian tail looks more natural than the base game. The tail would look much better without feeling out of place.

As the name suggests this mod whitens the teeth of Argonian to make the tone much more brushed. In the base game, Argonian and khajiit had yellow teeth. Now those days are gone and replaced with white teeth.

In this Argonian will look more like dragons and less like lizards. This mod is one of the most unique mods that retexturizer Argonian in the game and creates to make their skin look like the scales of a dragon.

This mod is one of the best mods that adds diversity to Argonian. This mod is highly recommended for the Argonian play-through. The texture looks so good and natural.