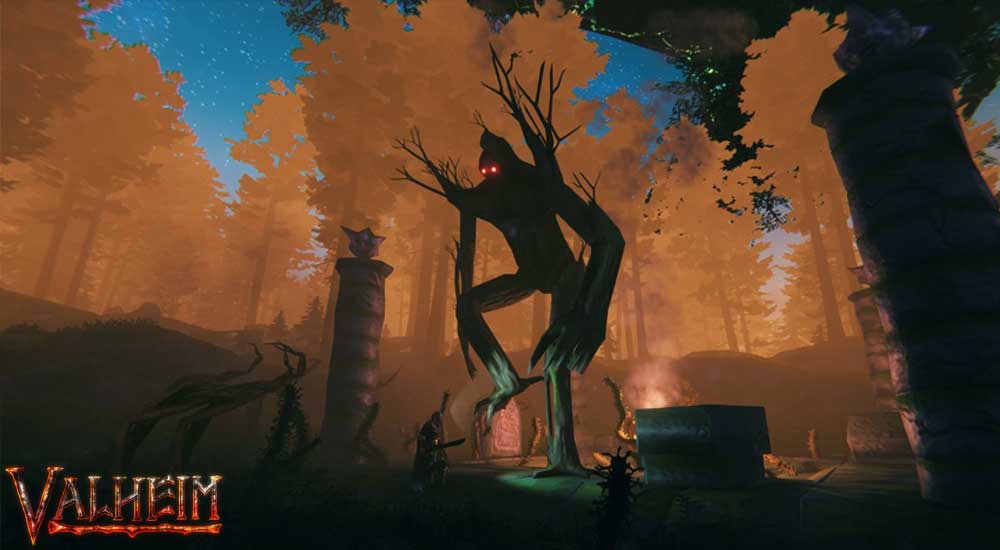 Location of the boss

The Elder is not as difficult to find as it seems. The player just needs to look for some hints around the black forest biome to find the exact location of the Elder.

In the black forest, the player needs to look for the boss location spawn points. These are small circular stones with red carving on them. These points will tell the player about the location of the boss. To find such points, explore the black forest biome and look for the small room like Stoney structures. As you go inside of them, the player will find the red circular stone. As he goes near it, respond to the prompt the boss location will appear on the map.

Possible spawn locations of the boss

The boss can spawn anywhere in the dark forest. As players find the spawn point, they will get to know about the nearest location of the platform, from which they can summon the Elder. An important thing from this point is that every spawn location point will tell the different locations of the summon platform. So try to explore all spawn location points and go to the location which is nearest to the player.

As the Elder has been the 2nd boss of the game, the player might not have explored the whole map. Therefore there are possibilities that the spawn locator will tell the location of the platform somewhere in the water. Therefore the player might have to use the raft from travelling.  Use a raft according to the wind direction. Use the mini compass on the top right corner of the screen to face the raft in the right direction, according to the wind.

The Elder boss can be summoned only near its platform. Therefore the spawn locator will be the location of the platforms on the map. The player can go to the nearest platform to summon the boss. There have been some key things that the player must do before summoning the boss and before going into the fight with the boss.

Prepare the platform before summoning the boss

The player can just directly summon the boss and fight with it to kill it, but there have been special measures that can help the player to defeat the boss more quickly.

Place bushfires around the platform

The player must place the bush around the platform of the boss. Place as many bushfires as possible. But keep in mind that there must be some space to pass through so that if a player needs to go around the platform, he can easily pass through these bushfires without taking damage. As the Elder is a huge boss, it will place the foot on the bush fire and will get burned and take the burn damage. In this way, the player has to do less effort to kill the boss.

Dug a hole near the platform

In addition to the bushfire, the player can dig a hole near the base of the platform. Dig a hole, and go under the platform. The platform will act as the roof of the hole and will save the player from the attacks of the boss.

The hole should not be that large that if a player jumps into it he will not come out again. So, keep the hole of the sufficient size that the player can hide in it and can attack the boss from there.

Weapon suitable for fighting the Elder

Unlike the Valheim Bonemass Boss, the Elder requires a distant weapon. This means the player cannot use blunt weapons to attack the elder. Use a bow and arrow or any other throw-able weapon to damage the Elder.

Therefore the best option for this is that the player must upgrade his bow and arrow first. Craft the burning arrow so they can give more damage to the boss. Therefore the choice of weapon will decide the easiness of killing the boss.

Fighting with the boss

After completing all requisites and prerequisites, it’s time to summon the boss and time to defeat the Elder. For this, go to the centre of the platform, and summon the boss. The Elder is a huge and gigantic boss. Its special ability is to grow roots and through some black waves-like things towards the player. Both of its attacks can give deadly damage to the player. So try to keep avoiding its attack.

There have been two ways to fight the boss. One is easy and a bit boring while the other is a bit interesting.

The easiest way to defeat the Elder

Another benefit of this technique is that the boss will always be over you as it is trying to kill you. Therefore you can just simply shoot arrows towards the boss from one place and can damage it. So, the player does not need to move or tackle the attacks of the boss, he just needs to keep standing in the hole and keep firing arrows towards the boss.

The major drawback of this technique is that some players might find it boring as they want to move around and want to kill the boss while fighting it, not by standing still. For such layers, the next technique will come in handy.

The 2nd technique is to fight the boss from outside of the hole. Simply place the bushfires around the platform, as they will damage the boss. After that, keep moving here and there and try to tackle as well as counter-attack the boss.

The Elder will grow the roots, keep moving to avoid getting trapped in the roots. The next attack of the Elder is to through some dark wave-like structure. This can get nasty if the player fails to dodge them efficiently.

This technique has been pretty interesting and keeps indulging players in the game. The player has to move here and there to dodge the root attack and also take cover to avoid the distant attack and also need to shoot the boss to give damage to it. Therefore this method might be more interesting for some players. So, the player can choose the technique according to their gaming style.

The reward of defeating the Elder

After following the above-mentioned precautions and tricks, the player can defeat the boss with ease. It will take some time to kill the boss but the player can do this with ease.  After killing the boss, some players might wonder what reward they will get and what will be the benefit of that reward?

Well, after killing the Elder, the player will get the Elder trophy. The player can place it in his home. The advantage of this is that after getting this trophy, the rate of cutting food of the player will increase.

Moreover, the player will get a swamp key. This key can be used in the swamp biome to access the special place there. This place is important not only for fighting the swamp boss but also for giving some special materials to do crafting and for upgrading the shield and the armour. Therefore both rewards are worth taking the risk.

In a nutshell, the Elder boss can be found in the black forest biome. Special kinds of the platform are required to summon the boss and it requires three ancient seeds to summon the Elder. Use bushfires to burn the boss without shooting or attacking. Try to dodge the attacks of the elder as much as possible. Make a sleeping area near the platform, but away from the reach of the elder. This is so if the player gets killed by the Elder, he must respawn near the area and he should not have to travel a large distance. So follows these simple tips and tricks to kill the Elder boss with ease.

Valheim Tools: How to repair tools in Valheim?