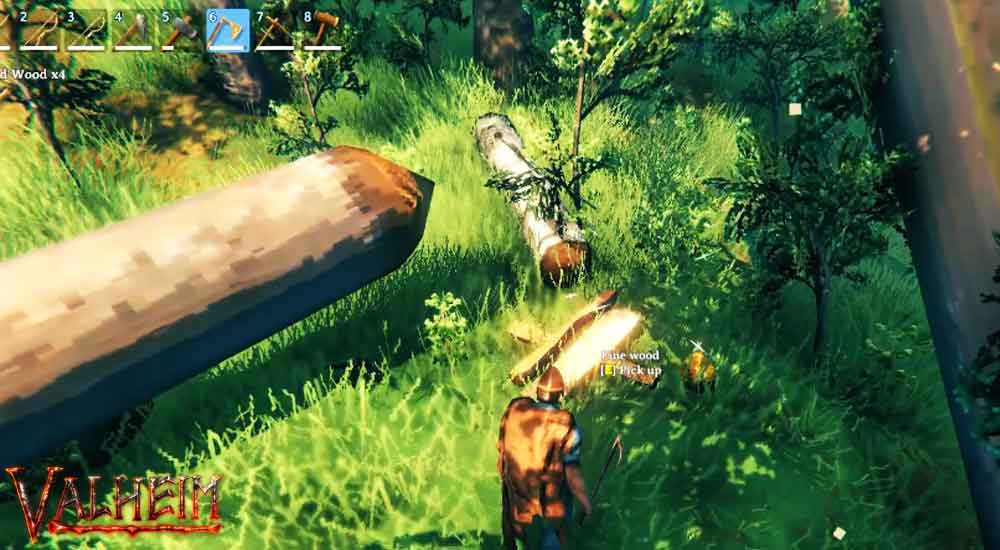 Valheim has been the game in which everything is linked to survival. The player has to survive by modifying his environment accordingly. There have been a lot of things that the player can do to modify his surroundings. He can build different things, weapons, tools and building materials that will help him to survive.

Talking about building or crafting things, wood has been the basic ingredient in the recipe of all materials. It even involves the crafting of high-graded weapons.

There have been a lot of types of wood. Simple food, fine wood, and Valheim core wood are the most widely used woods. They can be obtained from different trees of different biomes.

Fine food can be obtained from birch trees. Some gamers have also argued that the player can also get them from the oak tree. Both of these trees are abundant in the meadows biome. Meadows biome is the friendliest biome of the game. It has a lot of material and ores which players can use to enhance their skills in Valheim.

How to get fine wood from the respective tree?

As mentioned, fine food can be obtained mostly widely from the birch tree. Birch trees are easy to find in the meadows biome. They are white with white dots on them. Therefore the player can find them with ease and can also easily differentiate them from the normal tree.

Now cutting the birch tree is not an easy job. It can only be cut by the Valheim bronze pickaxe or the higher level of the pickaxe. Therefore the player must need to defeat the first boss to unlock the pickaxe. There have been two different ways to get the fine wood from the birch tree. One involves the use of the high-grade tool and the other involves the use of basic low-grade tools.

Getting fine wood by using the basic, low graded tool

As this method involves no high-grade tool, therefore it is a bit laborious as compared to the other. To mine fine wood this way, the player needs to find birch trees, grown in the proximity of each other. Moreover, there must be some normal trees closer to these bunch of birch trees.

After finding such a location, the player needs to chop down the birch trees using the normal pickaxe or any kind of axe or hammer. As the normal tree falls, it will damage some of the birch trees as well. When few trees fall on the bunch of birch trees, the latter will take enough damage to fall to the ground.

After that, roll the log of birch trees into each other. In this way, they will collide and take some damage. After a while, they will have taken enough damage to yield the fine wood.

This method is quite laborious and some players might get irritated while doing so. Therefore, the player must need a lot of patience to do this job.

If the player has made enough progress in the game, he must have unlocked a variety of high-graded pickaxes and other materials. He also must have a bronze or higher level of the pickaxe. If this is so, the player can get the fine wood with ease from the birch tree.

The player just needs to find the birch trees in the meadows biome. After that, he just needs to start chopping down the tree. After hitting the tree thrice or four times, the tree will fall. After that, chop it further to turn it into collectable pieces of fine wood.

This is the quick and relatively easy way to get the fine wood. But it does require a high level of weapon special pickaxe.

Use the Troll to cut the birch tree

After reaching there, make the Troll attack the player. As the Troll hits the player with its giant batten, doge its attack and makes it hit the birch tree. The swing of the Troll is so powerful that the birch tree can be cut down in a single attack.

Then lead the Troll towards the pile of the birch tree log. As it will again go to attack the player, dodge its attack in a way that it will strike the logs of the birch tree. And thus, the birch log will turn into small collectable pieces of fine wood.

Fine wood from the remains of the ship

Some gamers also argue that the fine wood can also be collected from the wreckage of the old ships. To find such wreckage, the player needs to explore the shore of the sea or ocean or any large water body. The player can find fine wood there but they are not very large in number. So, instead of finding the wreckage, it is better to spend that time chopping down the birch tree to get more wood easily.

Use of fine wood in the game

When the player collects the first-ever piece of fine wood, prompts of the new recipes will appear on the top left corner of the screen. Read all these recipes, and craft the weapon or tool which the player needs at that time. It can be used to make different tools, weapons, building materials, armours, and even different objects.