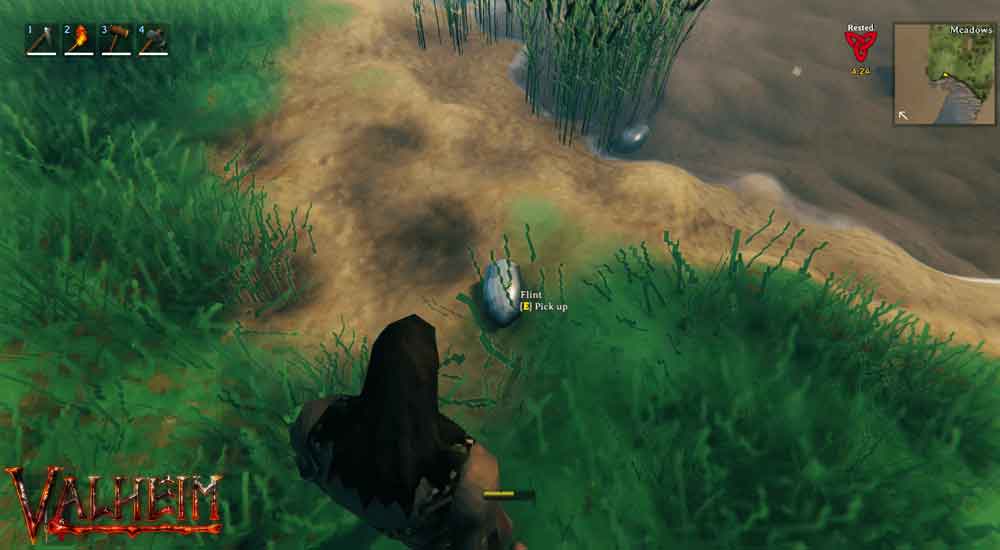 Valheim has been a survival game in which players have to combine materials to make or craft different objects and different things. Players can make weapons, potions, buildings, bushfires, even honey, and various other things by just mixing correct things in a specific number.

Such things or materials are abundant in Valheim. It includes stone, wood, irons, sterling, flints, etc. sterling has been one of these materials which can get at the very beginning of the game. In this article, you will get to know where to find flints, how to get or craft flints, and how to use flints. So, stick to the article and you will get to know a lot in the end.

Where to find flint?

Flint can be mostly near the water bodies in the game. Players can look for them around the sea or near the seashore. They are in abundance near the seashore. Sometimes players might need to wet their feet a bit and take a step in the sea for searching the flints. But there is no need to go deep. Just look at the shore and a bit away from the shore. Flints were in abundance around the water body.

Difference between flint and the rock

In exploring flints near the seashore, players might get confused between ordinary rocks and the flints. But don’t worry, in this guide, you will also find out how to differentiate both.

The rock has Stoney or steel-like colour with an irregular shape. Rock as the size of flints is mostly circular. But in the case of flint, they are mostly elliptical. They are light grey in the color. Due to colour differences, the player can identify the rock from the flint with ease. Moreover when the player approaches the flint, the prompt will appear on the screen that it is rock or the flint.

The easiest way to collect an abundance of flints

The easiest way to collect flint at once is to find a water body that has an abundance of flints around it. After that, collect are possibly collectable flints. After that, make a bed, a bush fire, and a room near this location. Sleep there and when the player will wake, all the flints have been respawned. Thus the player can collect all the flints again. Repeat the process to get the flints in abundance.

Unlike rock and iron, flint does not need to be crafted or mined. The player can just go to the water body and can look for flints here and there around it. Therefore, every basic weapon has flint in it. As the player advances in the game, the stone replaces flint and then the stone gets replaced by the iron in advanced stages.

Therefore every basic construction has flint in it. Specifically, the flint can be used in crafting four weapons and 2 building materials.

Building material which can be crafted by using flints

In addition to all these, the number of upgrades of the workbench also involves flint. Moreover, other weapon or potion upgrades sometimes involve flint in them. Further, the weapon crafted by using flints can be used to kill the level 1 boss of the game.

Therefore in Valheim, flints are the best and the basic constructing and crafting material for the player after wood. The player can make a flint axe to craft and mine different materials like stone and iron.

In concluding remark, flints are the most basic thing which the newbies may require at once at the start of the journey of Valheim. They can find it with ease and can use them in crafting different weapons. These weapons can come in very handy while fighting the first boss of the game. After reading this article, the players can easily find and use the flints easily to make the best use of them.