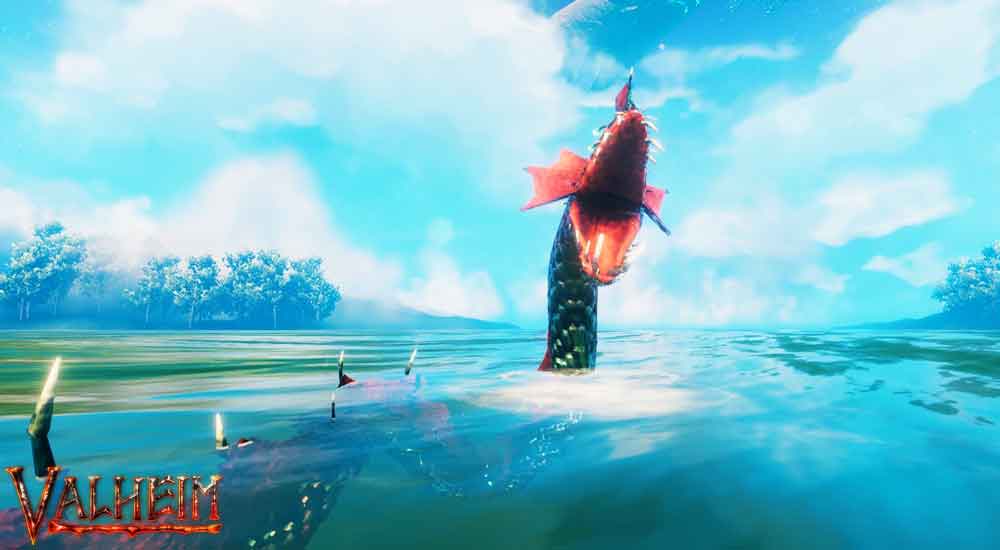 The world of Valheim has a total of six Valheim biomes. All biomes are land-related and only the ocean biome has plenty of water in it. It is the least explored biome as the player will hardly find something interesting there. Moreover, this biome is not easy to explore because the player must have a proper boat and weaponry to defend himself from the enemies in the sea.

Location of the serpent

Therefore most gamers avoid exploring this boring biome. The only interesting thing in this biome is the serpent. The player can fight and kill the serpent in the ocean biome to get the awesome rewards.

The serpent has no specific point of getting spawned in the ocean. Therefore the player must have to explore the biome as much as possible. While doing so, they might encounter the serpent.

As the serpent can be found in the ocean, the player must need a boat to go into the ocean. While fighting the serpent, the raft will do nothing. It will be destroyed after a single attack of the serpent and thus the player can die from drowning.

Therefore choosing the expedition vehicle is the most important thing in this exploration. The most suitable boats from this search are Longship or Karve. After getting or crafting the required boat, the player can start the expedition.

Suitable weapons to fight the serpent

Every major enemy can be killed by using a specific weapon or combination of weapons. To kill the serpent, the most important thing is a harpoon. The player must have a harpoon on his boat to capture the serpent.

After that, the player must have strong arrows and a powerful bow to shoot these arrows. In this way, the player can defeat the serpent with ease.

How to kill the serpent?

Now the question is, how to kill the beast in the ocean. On land, the enemies can be killed with ease while roaming around. But in the ocean, that’s not the case and the players just need to find a way to fight the serpent while staying in the boat. There have been two ways of doing so.

Defeating serpent in a group

Try to push the serpent to the shore. In this way after killing the serpent, the reward will now sink and the players can collect them with ease.

Defeating serpent in a solo fight

The player can also defeat the serpent alone. The strategy is simple, capture the serpent by using a harpoon and then drag it to the nearest shore. The only difference is that, while dragging the beast towards the shore, the serpent will take no damage, on the other case, the players are continuously shooting the serpent to decrease its health.

After dragging the serpent to the shore, try to kill the serpent using a blunt weapon or by bow and arrow. Use any best weapon which the player assesses at that point of the game. But try to kill it quickly because the serpent will try to go back into the water. And once it’s in the water and the player kills it, all the rewards will be dropped in the ocean and get wasted.

Rewards after killing the serpent

After killing the serpent on the shore, try to collect the reward as soon as possible. The serpent will drop three different items. One is the serpent scale, serpent head, and the serpent meat. Serpent scale can be used to craft the serpent shield and this shield has been one of the best and the strongest shields of the game for now. Therefore collect all serpent scales with precaution.

In a nutshell, the player must need a good and a large boat to explore the ocean biome and for especially fighting the serpent. After that, attach the harpoon with the boat and shoot the serpent with it as their player sees it. The serpent can spawn in the ocean biome randomly, so keep exploring the biome.

Valheim: How To Get Crystals & How to Defeat Stone Golem?